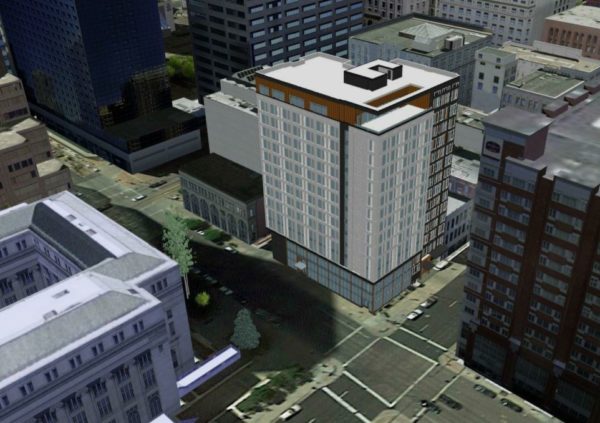 A rendering of the planned hotel. (Public records)

The 14-story downtown hotel proposed by a Rhode Island firm will be a Hyatt Centric — and construction is now underway.

A tower crane was installed in recent days on Magna Hospitality’s lot at the corner of 18th and Champa streets, and crews are working at the site.

The former parking lot previously had the address of 822 18th St., but the city’s parcel map has been updated to reflect a new address: 1776 Champa St. 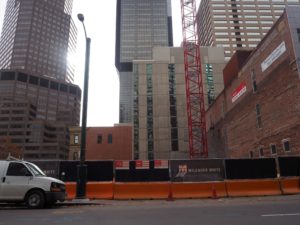 Work has begun on a 14-story hotel at the corner of 18th and Champa streets. (Thomas Gounley)

While the initial development proposal the company submitted did not detail the brand of the hotel or the number of rooms, updated documents state that the hotel will have 263 rooms and be a Hyatt Centric.

Hyatt introduced the Centric brand in 2015. This will be the first Centric in Colorado. Other Hyatt brands already operate downtown.

Materials submitted to the city also include the first known rendering for the project.

Magna and Hyatt did not respond to separate requests for comment.

Johnson Nathan Strohe is the architect on the project. Milender White is the general contractor.

A rendering of the planned hotel. (Public records)

A tower crane recently was installed at the site, which Magna Hospitality purchased in March for $8 million.