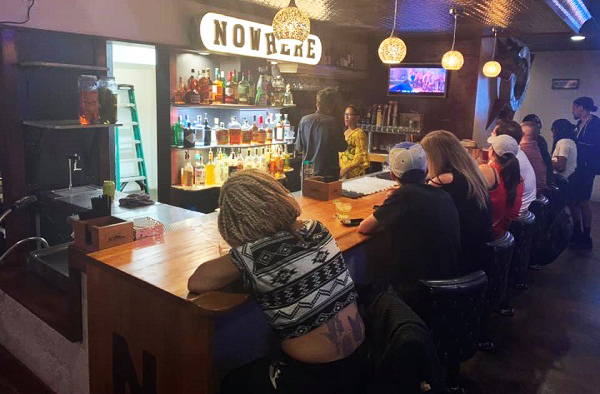 This new Five Points bar isn’t exactly in the middle of nowhere.

But its spot, hidden between Welton and Clarkson Streets within the Five Points Plaza retail complex, makes it feel that way, said owner Curt Sims. So the name stuck. The bar, dubbed Nowhere, opened earlier this month at 2736 Welton St.

“We really just want to be a neighborhood bar,” Sims said. “Five Points is intriguing to me. This neighborhood is really going to grow, and I saw an opportunity to get in there early as it grows — to get in on the ground floor.”

Sims signed a lease on the 1,000-square-foot space in May 2018 and started construction in January. He said he poured about $200,000 into renovations, which included the addition of a patio. The space can fit about 40 people, he said.

Nowhere offers a traditional bar menu that Sims described as “not upscale, but not down and dirty either.” Its food menu includes standard bar fare such as sloppy joes, hamburgers and street tacos.

“We just want to do a few things really well,” Sims said.

The longtime restaurateur also owns the Mexican restaurant Lime in downtown Denver and Winter Park, as well as the Mediterranean restaurant Gozo at 30 S. Broadway in Denver. He said he funded Nowhere himself.

Sims moved to Denver from Arkansas in 1980 and began working in the nightclub industry before opening Lime 20 years ago.

“I’ve been doing this since LoDo wasn’t LoDo,” he said.

“They’re going to do a lot of cool stuff,” Sims said of the building’s owners. “You can really feel the groundswell of what’s coming with the new owners.”