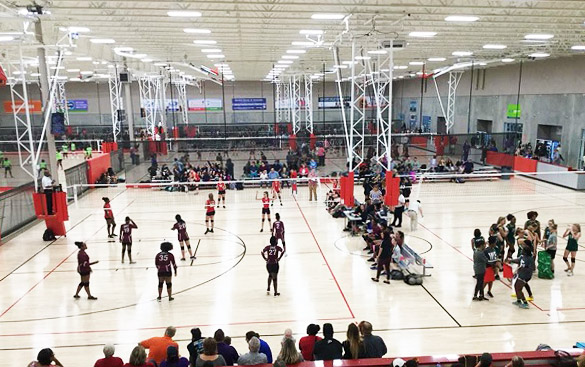 A volleyball tournament held at a FieldhouseUSA facility in Mansfield, TX. Credit: FirehouseUSA

It’s out with ovens and in with organized sports at Town Center at Aurora.

Columbus, Ohio-based Washington Prime Group, which owns the mall at 14200 E. Alameda Ave., said this week that the indoor sports facility FieldhouseUSA will replace Sears as an anchor tenant after the department store closes. The retail chain has said that will happen by mid-December.

A Washington Prime spokeswoman told BusinessDen the Sears will be demolished and replaced by a new building. The company purchased the Sears space in Aurora last year as part of a $28.5 million deal that included other Sears properties in other states.

Sears Holdings, parent company of both Sears and Kmart, filed for Chapter 11 bankruptcy protection in 2018.

FieldhouseUSA currently operates three facilities in Texas that offer year-round sports leagues and tournaments, according to a news release. Facilities are also planned for Seattle and Columbus, Ohio.

Fieldhouse is geared toward both recreational and competitive athletes. It also offers programs such as individual performance training and corporate events. Its website said that teams from across the country participate in tournaments hosted by FieldhouseUSA facilities. Sports include basketball, volleyball, pickleball and futsal, a version of indoor soccer.

Players also can rent courts at its facilities, though it offers no open gym time. FieldhouseUSA said it draws more than 1.6 million visitors per location annually.

Other anchor tenants operating at Town Center at Aurora include Dillards, Macy’s, JCPenney, and Century Theaters. The Aurora mall is the 10th-largest Denver-area shopping center.

A volleyball tournament held at a FieldhouseUSA facility in Mansfield, TX. Credit: FirehouseUSA

Sears told the state in August that the store will close by mid-December.