Nicolo’s Pizza has cut out of Cap Hill.

The pizzeria closed this month after more than a decade at the corner of 13th and Downing.

A sign on the door Tuesday said Nicolo’s “will be closed until further notice.” A staffer at Hugo’s Colorado Beer & Spirits, next door to the shuttered pizzeria, said Nicolo’s closed about two weeks ago.

The restaurant’s phone number went unanswered Tuesday, and its voicemail box was full. 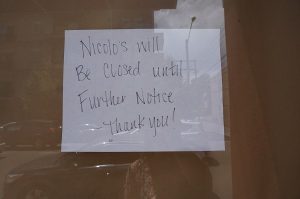 A business next door indicated it closed two weeks ago.

The city approved a zoning permit in April for an eating and drinking establishment dubbed Ritual Public House to take over the space. Contacts for the new business did not respond to requests for comment by press time.

There are three other Colorado eateries with the Nicolo’s name, in Lakewood, Longmont and Highlands Ranch. An employee at Nicolo’s in Highlands Ranch confirmed the affiliation, but could not provide details on the closure, adding that each Nicolo’s is an “independently owned franchise” that don’t often interact.

The restaurant had operated for more than a decade at the corner of 13th and Downing.