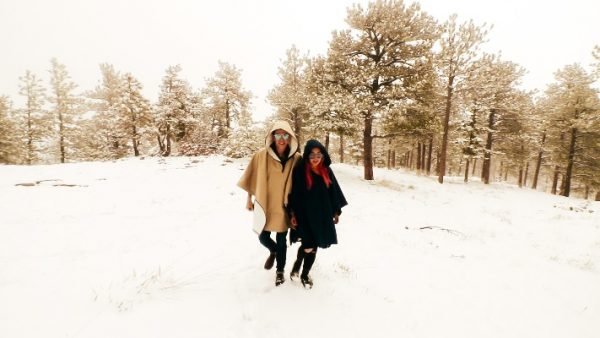 Carrie Yang and David Lank Pierce are selling their ponchos for the outdoors on Kickstarter. (Submitted)

Leave it to a rainy forecast to spark a business idea.

Carrie Yang and David Lank Pierce, who met in elementary school, were headed to the Backwoods Music Festival last year in the Ozarks in Arkansas. The multi-day music camping festival was going to be rainy, so the couple ordered $20 disposable ponchos from Amazon.

The couple, who live in Denver, soon decided they could make something better than the current rain gear on the market.

“When we were looking at things that could cover us and our bags, it was umbrellas or ponchos,” Pierce said, adding that many ponchos are just for one-time use and made with cheap plastic. 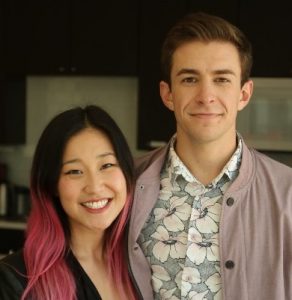 Yang and Pierce — 26 and 28 years old, respectively — spent the past year designing a poncho packed full of features and feeling hundreds of fabrics before selecting a soft, three-layer fabric that’s fully waterproof, but not crunchy. The zippers allow it to transform into a blanket, rainfly or tarp, and it includes a hidden pocket for credit cards or keys.

“One of my favorite features is it packs into itself to become a fanny pack,” Yang said.

Last week, the couple launched a Kickstarter campaign, seeking to raise $100,000 to fund the first round of production. As of press time, the campaign had raised $23,600 with 22 days to go.

The ponchos, which weigh two pounds, cost $195 on Kickstarter, and will retail for $275 after the campaign ends. Yang and Pierce plan to sell them online through their website.

Yang and Pierce plan to manufacture their ponchos — made with 100 percent recycled plastic — at Everest Textile in North Carolina. They expect to deliver products to customers in December.

“Due to manufacturing costs and due to the minimum order quantities for the fabrics … our first round of ponchos will cost $100,000,” Yang said. “We decided to go to Kickstarter because we couldn’t fund that ourselves.”

While other ponchos and rain gear exist, Pierce and Yang said their multifunctioning and artist-designed creations set them apart.

“We want this to be a garment that you can take to the streets and in nature,” Yang said.

Ponchos, the couple said, have a lot of advantages over more traditional rain gear. While a rain jacket keeps the wearer from getting wet, it doesn’t necessarily keep purses, laptops or other valuables dry. Plus, their ponchos have the ability to release sweat and moisture inside the poncho, they said, while wicking moisture from the outside.

The ponchos, which cost $100 to make, come in four colors or eight designs from various artists.

Yang and Pierce moved to Denver from Arkansas in March. The couple attended Denver Startup Week last year, where they met their future designer Hillary Glen, who has designed apparel for Spyder, Smartwool and Pearl Izumi, among other outdoor brands.

Carrie Yang and David Lank Pierce are selling their ponchos for the outdoors on Kickstarter. (Submitted)

“One of my favorite features is it packs into itself to become a fanny pack,” Carrie Yang said.

Here’s the link to the Kickstarter campaign for the (hugs:) Poncho! http://friendse.fnd.to/hugs