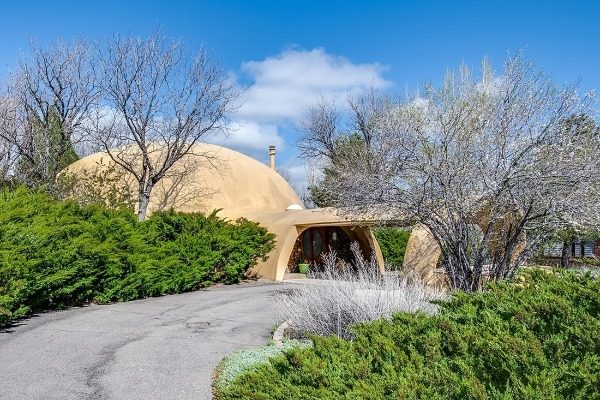 A dome-shaped residence is for sale in Centennial. (Photos courtesy MileHiModern)

Brenda Cutler and Tom Douglis were not looking for a new home, happy in their dreamy downtown loft.

That is, until Cutler was flipping through a real estate magazine and saw a photo of a dome residence in Centennial. She called her husband and said, “I found our future home.”

“It has brought us joy every single day,” Cutler said. “It’s exactly what we thought it would be; even after 10 years, it’s still thrilling to walk through the door and see the incredible spaciousness and see the pool shimmering. It’s just been a joy.” 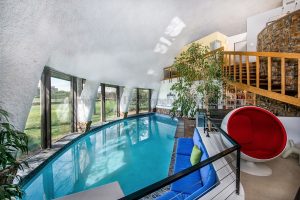 The home features an indoor pool.

Now, the couple are looking for someone who will have a similar reaction. They’re putting the two-story dome up for sale, asking price $935,000.

Aeronautical engineer Chris Barnes designed the home in the early 1980s. Barnes had a fascination with domes, the couple said, and traveled throughout Europe visiting dome structures and seeking inspiration.

While some domes are built by assembling triangular shapes that fit together, Barnes constructed the home using a method the current owners said was revolutionary at the time. He used a balloon to create the shape of the dome, then used material mixed with concrete to mold around the shape of the balloon, Cutler and Douglis said.

The couple said part of Barnes’ motivation was to conserve energy in the house. The result, however, created a much more memorable experience for them as well as the guests they frequently entertained.

“No matter how much (architecture) people have seen, they can’t help it but pull out their cellphones and take a picture,” Cutler said. 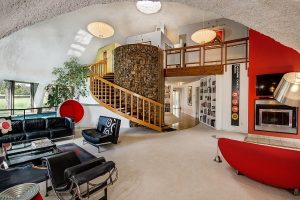 The centerpiece of the home is a spiral staircase circling a rock column.

Besides the indoor pool, the home features 23-foot-high ceilings and a spiral staircase circling a rock column. For the uninitiated, the couple said the acoustics of the home can be surprising. While the dome shape and concrete walls keep out the noise of nearby Arapahoe Road, Cutler and Douglis said indoor noise can feel much closer than it actually is.

“When you’re used to loft living, you get used to the spaciousness of it and you never feel constrained,” Douglis said. “For a creative person who doesn’t like being hemmed in by eight-foot ceilings, it’s a feeling of optimism and that, I think, inspires both of us.”

The couple, who own their own branding firm, completed a kitchen renovation, added a hot tub, and redid the guest bathroom and laundry.

“It’s all been passed down as if it’s a work of art and this is part of the provenance of the house,” Cutler said. “Over the last 10 years, we’ve tried to update certain aspects of it while still keeping the retro elements.” 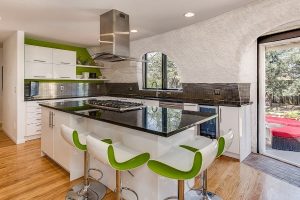 Stats: 4,500 square feet with four bedrooms and three bathrooms. The property includes a three-car garage and patio, and sits on a 0.8-acre lot.

A dome-shaped residence is for sale in Centennial. (Photos courtesy MileHiModern)

Visitors “can’t help it but pull out their cellphones and take a picture,” the current owner said.

Ha! I remember the boob house. I good friend of mine owned it in the ’90s and was a great steward of it’s unique history. Throwing fabulous mid-mod parties!

This house intrigued me so I asked my husband who is a Realtor to looked it up in he MLS. Today is May 9 and it is 1:00 PM and this property at 6681 S. Abilene Way, is not currently listed for sale in the RE Colorado MLS. That is frustrating. When will it be listed for sale?

Hi Lori, reporter here, the house should be on the MLS next week. Right now you can find more on MileHiModern’s site here: https://milehimodern.com/modern-collection/designer-dome/

Hey Lori, I can get you more information. I am the listing agent. Feel free to call, text, or email me. Thanks!

This is beautiful. It’s actually a full-blown house shaped like a dome. I have a vacation dome built by https://www.simpleterra.com/dome-homes/, they specialize in quick and quality dome homes.