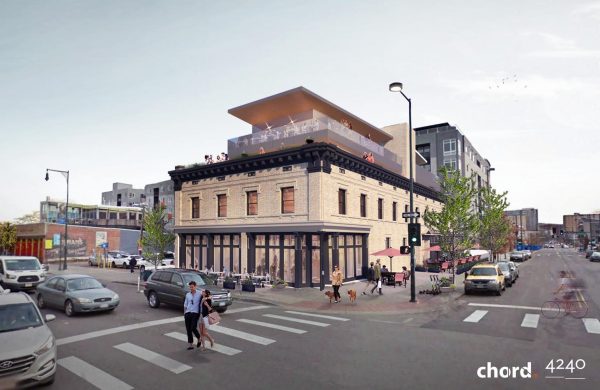 A rendering of the buyers’ plans for the building at 2100 Larimer St. (Courtesy Monfort Companies and Magnetic Capital)

The building that housed longtime dive bar El Charrito prior to its closure late last year has changed hands.

Monfort Cos. and Magnetic Capital — two companies with other real estate holdings in the area — said Tuesday that they acquired the two-story building at 2100 Larimer St. for $2.9 million.

Magnetic Capital is led by Daniel Huml. In 2018, the company purchased the building at 1920 Market St., home to Brothers Bar and Grill and other tenants (and once home to the cast of MTV’s “Real World”). It added to its holdings last month with the purchase of the building at 1523 Market St., which it plans to turn into office space.

Huml and Monfort said in a Tuesday interview that they plan to renovate the building, and add third and fourth stories if they can get the necessary approvals. The upper floors likely would be office space, while the ground floor will continue to have restaurant or retail space.

“Our goal with this is to really preserve the historic nature of the property, and do something thoughtful,” Huml said.

Chord Design Studio and 4240 Architecture are the architects on the project. Huml and Monfort said they have similar visions for the neighborhood, and hope to partner again on similar building projects.

“Fundamentally, we’re excited about the neighborhood, the growth opportunities that are here,” Monfort said.

The building was sold by Pat De La Torre, who according to Westword opened El Charrito at the site in 1962 and operated it for decades. The bar closed for several months in 2009, but then De La Torre’s daughter and son-in-law reopened it.

Speaking to The Denver Post in November of the decision to close for good, Matt Orrin — the son-in-law — said, “There are a bunch of factors, but you get to a point where you just get tired of dealing with all these things that beat you down.”

Jay Soneff of Jamis Cos. represented the seller.

A rendering of the buyers’ plans for the building at 2100 Larimer St. (Courtesy Monfort Companies and Magnetic Capital)