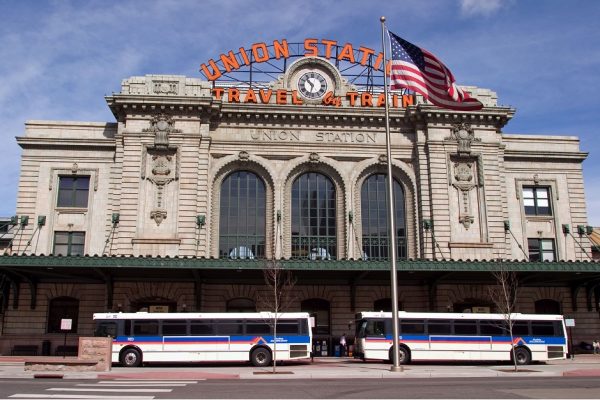 Greyhound would like to move its Denver operations to Union Station. (Photos courtesy RTD)

Greyhound wants to make the move it pulled back from a decade ago.

The Dallas-based bus operator has listed its downtown bus station for sale because it hopes to move its Denver operations to Union Station, a transcript of a recent RTD board committee meeting reveals.

Bill Van Meter, assistant general manager of planning for the Regional Transportation District, told the committee on April 2 that Greyhound thinks moving to Union Station would give it a “truly multimodal hub.”

Union Station already has a bus concourse with about 9,000 boardings a day. It opened in 2014. 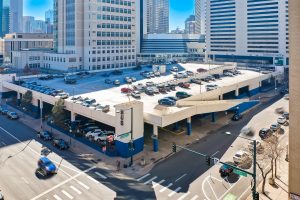 Greyhound has put its bus station at 1055 19th St., which spans a full city block, up for sale. (Courtesy JLL)

Greyhound listed its current bus station at 1055 19th St., a prime redevelopment site that spans a full city block, for sale this week. The site is zoned for up to 40 stories. JLL broker Patrick Bolick told BusinessDen Wednesday that he and colleagues Jamie Roupp and Julie Rhoades were “pretty close to finalizing a relocation site” for Greyhound, but declined to disclose specifics.

Greyhound looked at moving its operations to Union Station more than a decade ago, as renovations began to turn the century-old train station into a broader transit hub. But citing financial reasons, the company canceled plans to do so in late 2008. The Denver Business Journal reported at the time Greyhound needed to come up with $22 million.

Greyhound then considered moving Denver operations to a number of different sites, including north of the Home Depot near Santa Fe Drive and Alameda Avenue, and near Mile High Stadium, according to a 2010 Denver Post story.

In 2015, Greyhound and the Colorado Department of Transportation teamed up to produce a “regional bus facility study.” That report recommended that Greyhound operations be moved to Union Station, Van Meter said. Greyhound approached RTD about the idea that same year.

Van Meter said RTD has told Greyhound that, at Union Station, it won’t be able to do certain things it does in its own facility now, such as package operations. Those operations could be moved to Greyhound’s local maintenance facility, located in the 2400 block of Arapahoe Street. 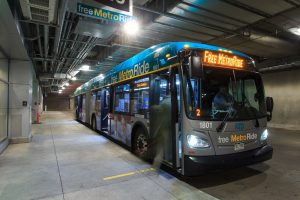 A Metroride bus within the bus concourse at Union Station.

Van Meter said about 500 passengers use Greyhound’s facility daily when it’s at its busiest during the summer. Roughly 40 percent of the buses that arrive or depart from that facility already stop at Union Station because they are Amtrak thruway trips, he said.

RTD Controller Doug MacLeod told the committee that RTD still was determining how to financially structure an agreement that would let Greyhound use Union Station as its local hub. He said he talked to operators of four other public facilities around the country that Greyhound uses — in New York, Boston, Toledo, Ohio and Washington D.C

“We also decided probably the easiest way to administer an agreement like this would be to charge by bus arrivals and departures,” MacLeod said. “And then we’re still discussing this, but should there be peak and off-peak pricing.”

MacLeod said RTD wants to ensure any agreement it makes with Greyhound is “revenue positive or revenue neutral.” And Van Meter said RTD will consider how the addition of Greyhound could affect two of the facility’s challenges – security and restrooms. 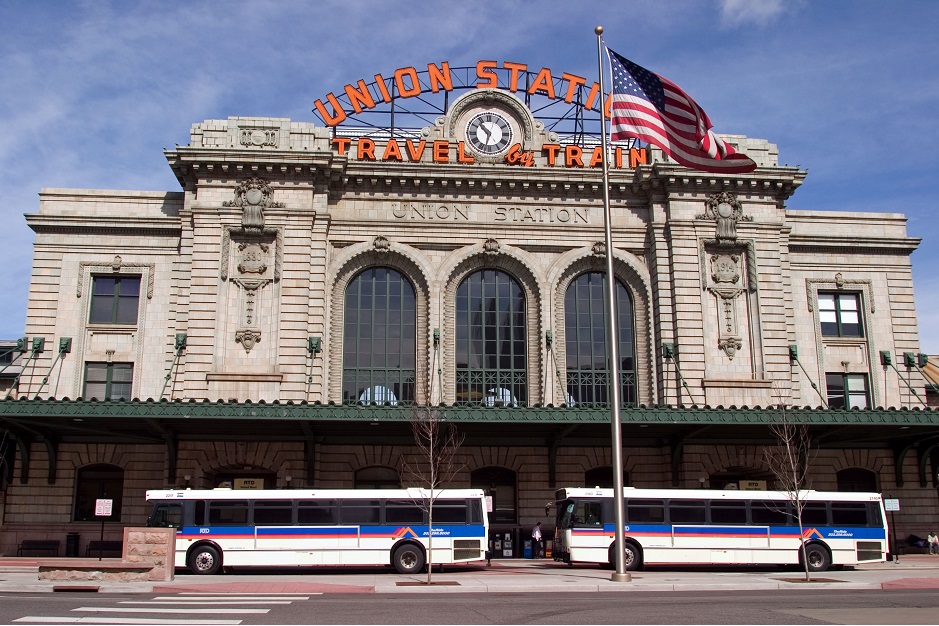 Greyhound would like to move its Denver operations to Union Station. (Photos courtesy RTD)