The makers of OtterBox phone cases now want to protect your meal kit.

The products, made from injection-molded plastic, come with movable dividers and reusable ice packs to keep food items cold and separate. The boxes are intended for companies such as Blue Apron and HelloFresh, which ship meal kits to customers.

About 15 engineers plus support staff have worked on Liviri for two years, Vater said.

“Our expertise is in injection molding, and our history has always relied on going out and finding uncharted territory, if you will,” Vater said.

The idea is that customers will receive meal kits in Liviri boxes, then schedule a FedEx pickup to return the container.

Research firm Packaged Facts said in a late 2018 report that the meal kit industry had revenue of $2.6 billion in 2017 and was on track for $3.1 billion in 2018. But the firm said it expected that figure to decline in subsequent years. 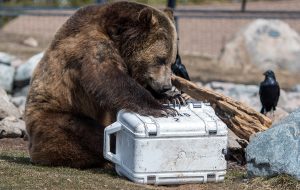 OtterBox released a line of bear-proof products in 2017 in an effort to break into the outdoor industry. (BizDen file photo)

He said Liviri already has ran a pilot program with a grocery meal kit producer and a fresh-pressed juice company, both of which he declined to name. The products are being manufactured at Otter Products’ factory in Detroit.

Each container costs about $200, and companies can lease them as well.

“We’re confident that you’ll get 75 uses,” Vater said. “That’s replacing cardboard boxes and shipments. We’re doing testing to see if we can get more of it out of that.”

Otter Products employs more than 1,000 employees worldwide, including 850-plus in the U.S. In recent years, Otter Products has made a push into the outdoor industry, releasing a line of bear-proof coolers, dry bags and drinkware.