The city-owned course, which has been closed since November 2017 for flood mitigation work and other improvements, will not reopen later this year as originally planned, a spokeswoman for Denver Parks and Recreation said Thursday.

“We’re not opening the course until the turf can handle the stress of golfers playing on it, just to ensure the long-term success of the course,” she said. “We’re anticipating that the first rounds of golf will be played in the spring of 2020.”

The city originally planned to open the course this fall to “limited play” without the use of carts. 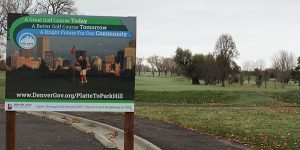 Instead of this fall, a spring 2020 reopening is now anticipated. (BizDen file photo)

Although the course won’t be open, Karvaski said the city still expects to open the new clubhouse this winter for special events.

The $45 million renovation is intended mainly to integrate water-detention areas to help protect nearby neighborhoods from flooding. The project also includes a new layout for the 18-hole, par 71 course, a full driving range and a new clubhouse with event space.

The new clubhouse will have a west-facing back patio and floor-to-ceiling windows to accommodate views of the mountains and city skyline. The structure is being built further east than the original, and will be situated along 23rd Avenue midway through the course.

The water-detention work has been completed, according to Heather Burke, Denver Public Works spokeswoman.

“The stormwater detention is fully operational, capturing and conveying stormwater runoff through the system into the South Platte River,” she said in an email Thursday. “Later this spring, we will add plants for filtration to improve the quality of the water.”

The course’s new clubhouse and maintenance facility are still under construction. Work is expected to wrap up in June.