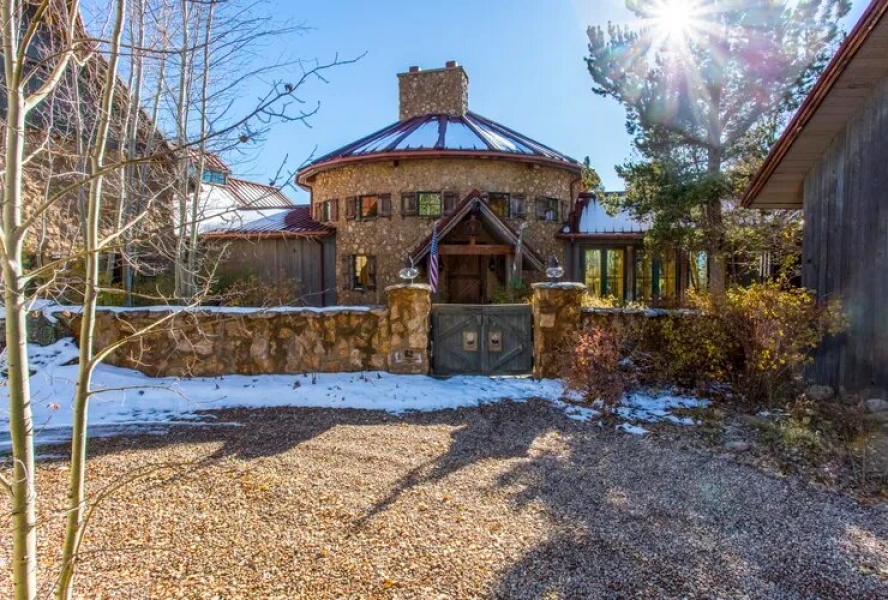 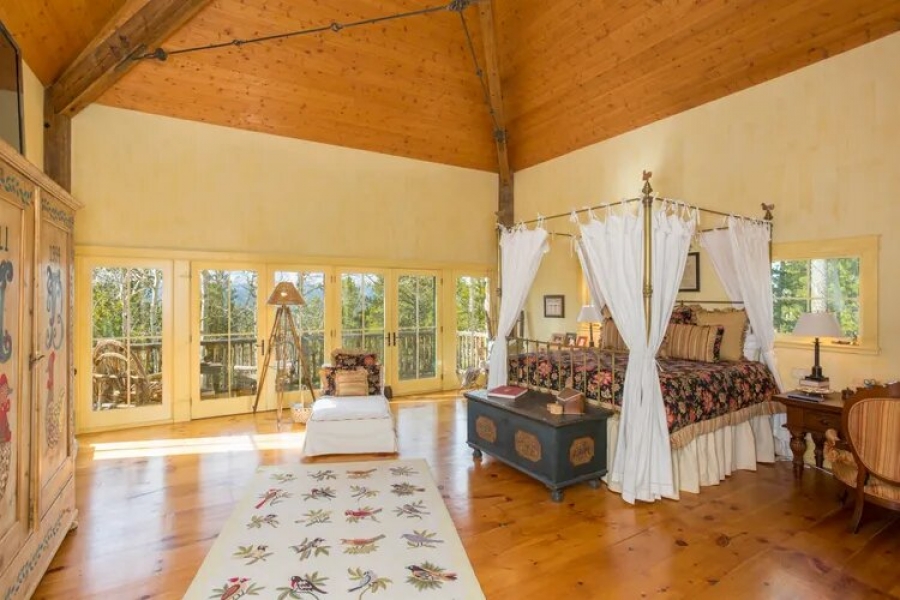 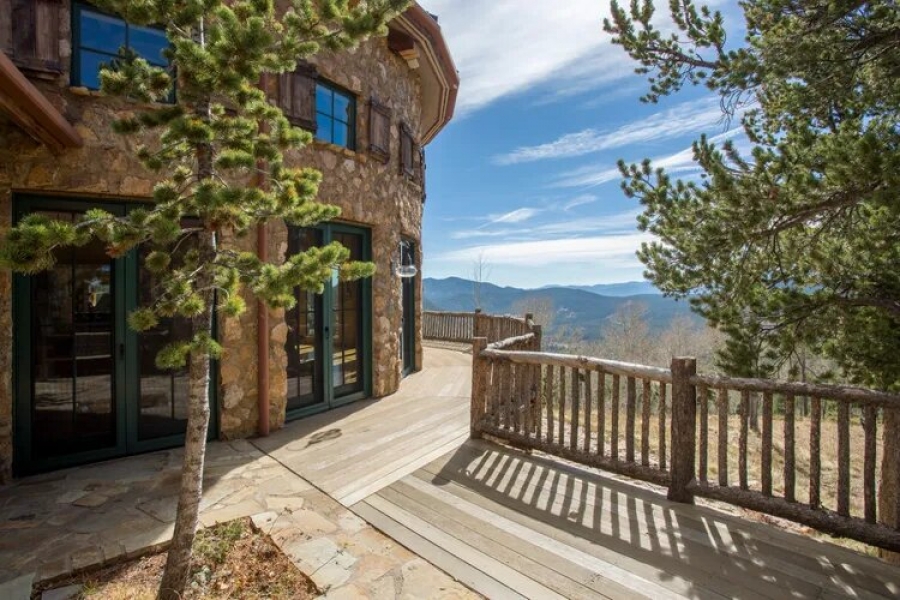 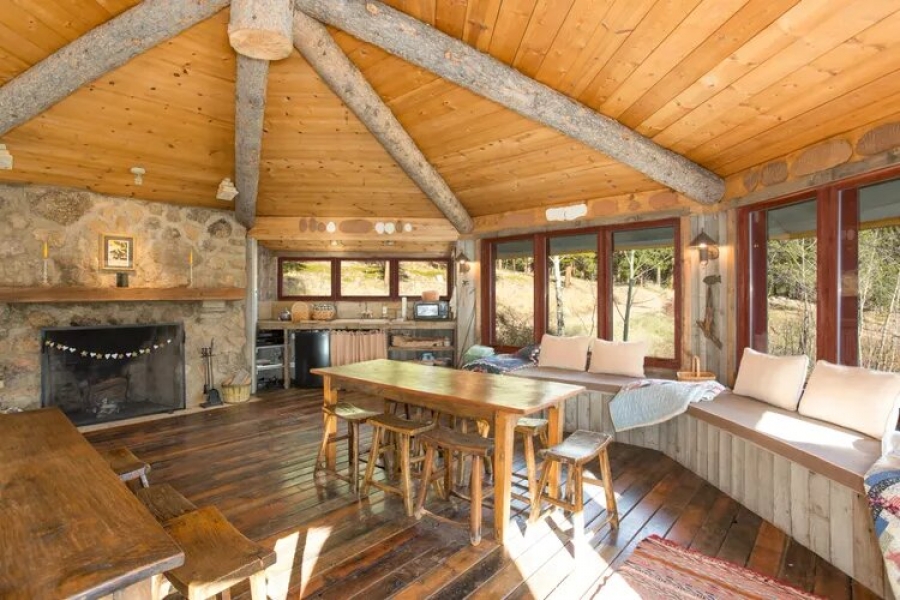 Pond House
The Pond House includes a fireplace, running water and a kitchenette. 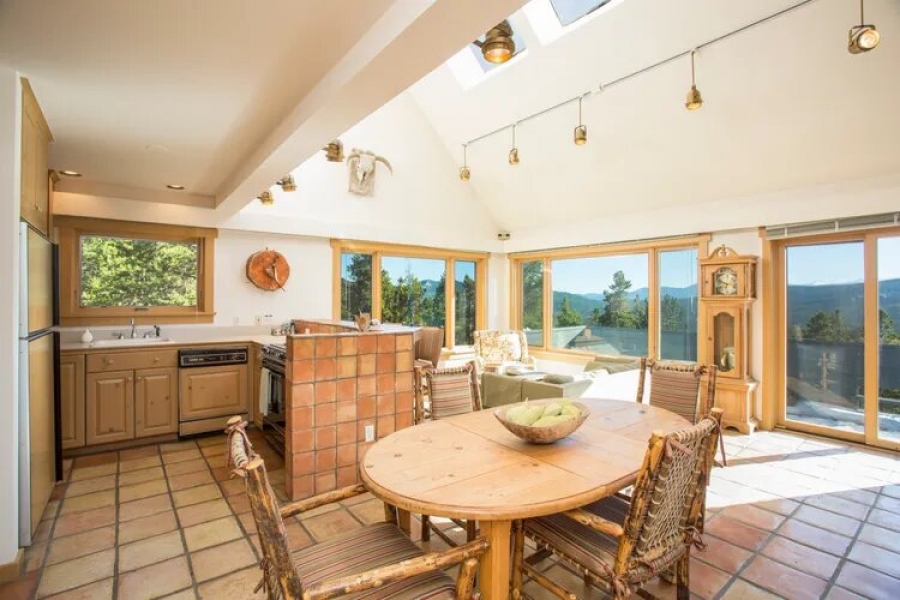 Guest House
The upper level of the Guest House holds a duplex, with a pair of two-bedroom units. 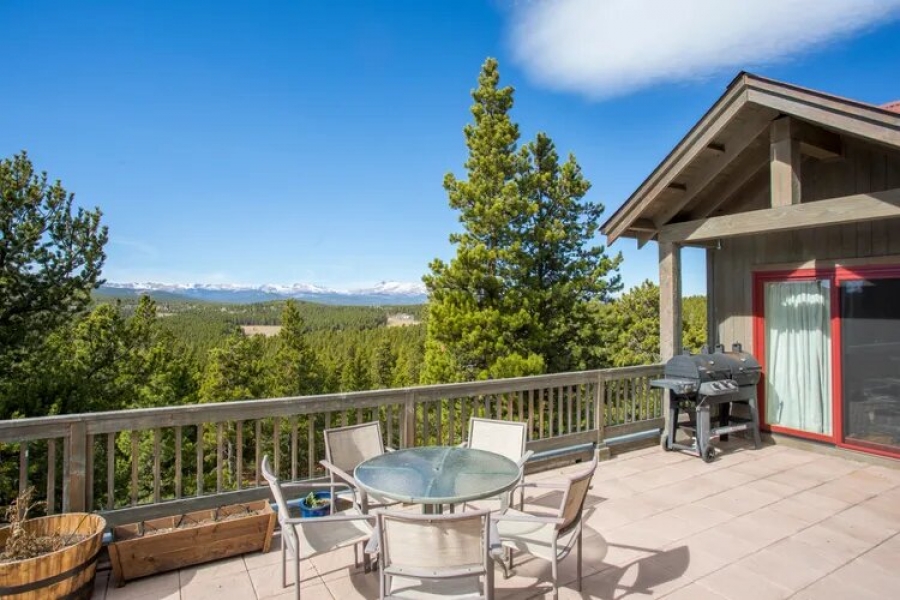 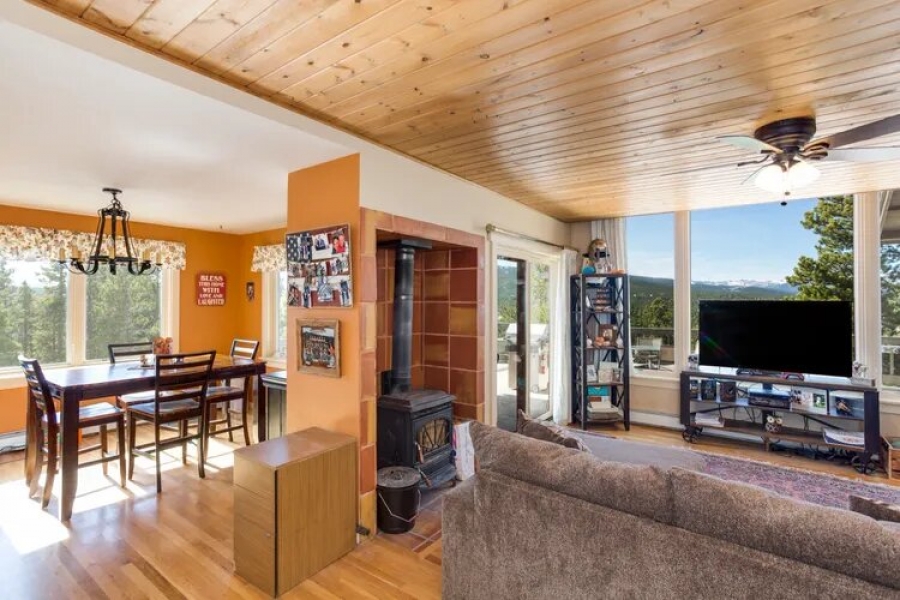 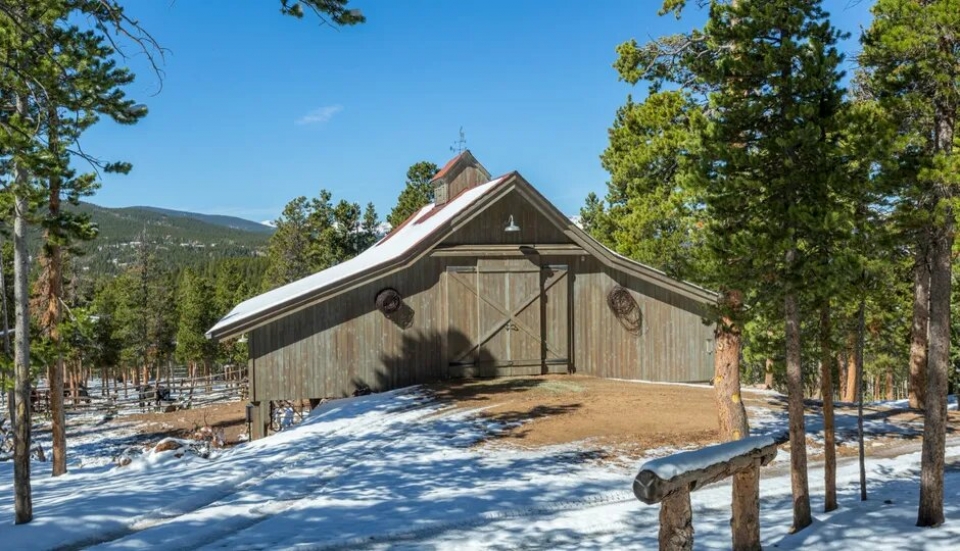 A two-story barn near the Caretaker Cottage has four box stalls for horses.

A mountaintop estate near Black Hawk is for sale at $15 million.

Roland St. Louis, an employee for the property’s title-holder Mount Thomas Reserve, said a husband-and-wife team, whom he declined to identify, assembled the property by purchasing eight parcels of land in separate transactions during the 1980s and early 1990s.

St. Louis said the couple have been splitting their time between their mountaintop home and Florida for more than two decades. Now reaching retirement age, the couple is looking to unload their elevated oasis. 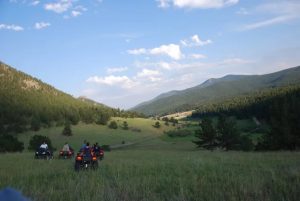 Construction on the property began about 25 years ago, and the final structure was completed about a decade ago, St. Louis said. The property’s website indicates that the cost of the development in present-day dollars clocks in at $10.38 million.

To design the five buildings, the couple enlisted architect Don Ruggles to “compose a fairy tale,” the website said.

“He imagined a pioneering couple coming to Gilpin County a century earlier and deciding to build their home on a mountaintop above the virgin forest and lush alpine meadows,” the website reads.

Ruggles used this fantasy to devise the home, imagining not only the fictional pioneering couple’s “original” residence, but also upgrades that since would have been added to the estate. The master bedroom was designed to resemble the homesteaders’ fabled “original stone cabin,” and the 1,000-square-foot, circular great hall is reminiscent of the imagined 19th-century husband’s blacksmith shop. 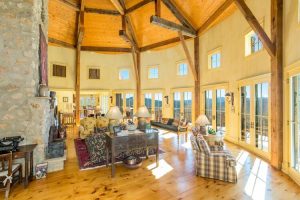 The property’s main residence is located at the peak’s summit, 9,325 feet above sea level, according to the website. Aptly named Summit House, the 11,300-square-foot stone structure was designed to re-create the feel of Gilpin County’s 19th-century gold rush. The house extends over two floors joined together by two staircases and an elevator. It holds five bedrooms and seven bathrooms, but its centerpiece is the home’s “great hall,” a rotunda with exposed structural beams and a large stone fireplace. Three “flex rooms” could be turned into additional bedrooms, the website said.

The Guest House, located down the mountain from the Summit House, was the first structure built on the property. The upper levels of the edifice hold a two-story, side-by-side duplex that totals 2,900 square feet. Each two-bed, two-bath unit has skylights and a full kitchen, and leads out to a joint terrace overlooking the mountain range. 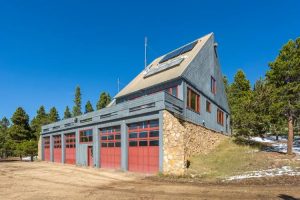 The Guest House, located down the mountain from the Summit House, was the first structure built on the property.

Beneath the duplex sits a 3,700-square-foot garage fit for 15 cars, per the website. Half of the garage is heated and equipped for a mechanic shop.

The Caretaker Cottage, located about a quarter-mile away from the Guest House, presents a similar layout: 2,800 square feet split between two upper-level duplexes, each with a master bedroom and a bathroom. The cottage’s ground floor holds another 2,300-square-foot garage with a carpenter’s shop, ceramics studio, mechanical bay, storage areas and a half bathroom.

A two-story barn near the Caretaker Cottage has four box stalls for horses. (The three horses that live on the property are also for sale.) Each stall has a feeder and automatic waterer, as well as a heated tack room with running water. The upper level is a large bale loft with trap doors that drop hay to the feeders in each stall below.

At the base of the estate sits the Pond House, located about 8,600 feet above sea level at the southern perimeter of Mount Thomas. The circular Pond House is lined with windows and overlooks a natural pond, and is outfitted with a fireplace, running water and a kitchenette. 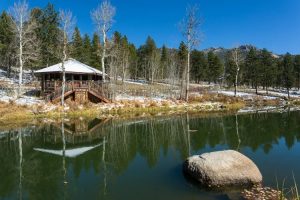 The Pond House sits at the base of the estate.

“I love it there, in part because the natural surroundings are so compelling,” St. Louis said. “The atmosphere puts it above the mosquito line, so there are practically no bugs that bother you. And there are hummingbirds everywhere. It’s a magical place.”

The property is for sale by the owner. Gilpin County property records list Mount Thomas Reserve LLC as the owner of the peak, but sales records show two entities — The Clinton Co. and Lloyd J. Boggio Trustee — purchasing some of the parcels in the 1980s and early 1990s. Boggio co-founded The Clinton Co., as well as Carlisle Development Group, both based in Florida. Carlisle’s principles, including Boggio, were indicted in 2015 for multiple counts of conspiracy to commit theft of government money and property. Boggio was sentenced to 4.75 years in prison and ordered to forfeit approximately $7.1 million.

Stats: The property includes 300 usable acres atop Mount Thomas, including 210 acres of a fully groomed forest of Aspen and pine trees. Five structures are situated on the mountain, which offer a total of 17,000 square feet of living area. Between the three buildings primed for residential use, the property offers 15 bedrooms and 13 bathrooms. 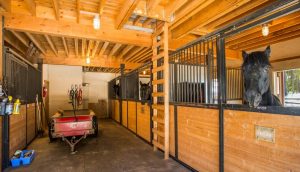 The three horses living on the property, which are also for sale.

The finer things: The property offers 360-degree views of the surrounding mountains, including the Continental Divide and Golden Gate Canyon State Park — to which the property has a direct, private entrance. As the owners have not allowed hunting on the property, Mount Thomas hosts an assortment of wildlife, including moose, elk, owls, golden eagles, wild turkeys, red-tailed hawks and “countless” hummingbirds. Approximately seven miles of hiking trails run across the land. The buildings are equipped with all modern conveniences: telephone, satellite television, high-speed internet, four wells, multiple potable water cisterns and reservoirs, irrigation and water feature equipment, underground fuel storage with dispensers, and electrical infrastructure.

The website said that existing appliances, and most furniture and decor items, are included in the purchase price. Not included, but available for purchase along with the peak, are three horses, a horse-drawn carriage, a 19th-century sleigh, 11 ATVs, a pool table and an antique fire truck.

Listing agents: For sale by owner 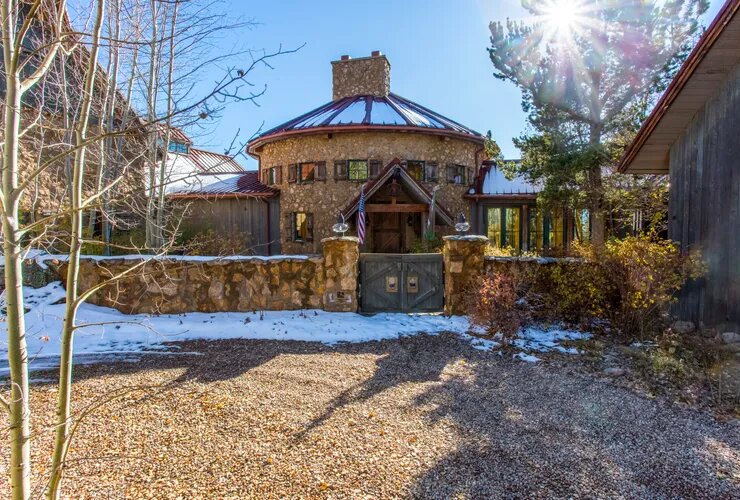