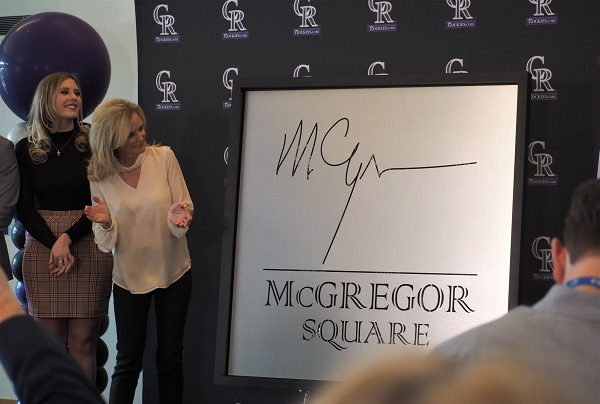 Keli McGregor’s widow and children helped unveil the name of the development.

The Colorado Rockies on Thursday said the massive mixed-use development going up on the former parking lot across 20th Street from Coors Field will be called “McGregor Square,” after Keli McGregor, the late team president.

McGregor served as president from 2001 until his sudden death at 48 from a rare virus in 2010. 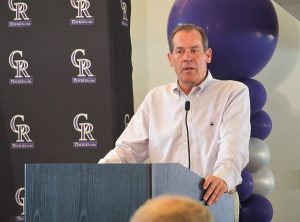 Rockies CEO Dick Monfort said the name came to him one evening at home, after initial efforts to find a name had failed.

“We had some professionals come in, and they got us all these names,” Monfort said of the initial effort. “I think they had nine names, and I don’t know if nine was because there’s nine players on the field, or they knew they were all crappy, and that we were going to have to come up with the real one as No. 10.”

That evening at home, Monfort said, he was looking up synonyms of words the pros had suggested, and considering various takes using the nearby roads — Wazee, Wynkoop, 19th, etc.

It wasn’t helping, he said. Then he began going through the vision for the name in the first place. 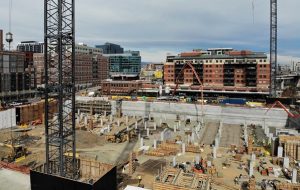 A Thursday photo of the full city block where McGregor Square is being built.

With that, Monfort invited McGregor’s widow and children up to the stage to unveil the name.

The development, which will take up a full city block, is under construction and expected to open Jan. 1, 2021. The project will incorporate 655,000 square feet of commercial and residential space in three separate buildings, surrounding an open plaza.

The buildings will house 112 condos, as well as office space, retail and restaurant space, and a 176-room hotel, which also is slated to include a team hall of fame. 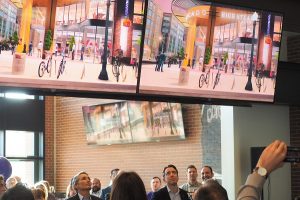 Attendees of the Thursday event watch a video rendering of the project.

Stantec is the architect on the project. Hensel Phelps is the general contractor. Sage Hospitality will operate the hotel. The Laramie Co. is handling the retail leasing.

Plans for the project were unveiled in late 2017. The parking lot closed in September, and three tower cranes are now at the site. Crews have excavated the lot in order to install underground parking.

The lot is owned by the Metropolitan Baseball Stadium District, the state division that owns Coors Field. The Rockies struck a deal to pay $125 million to lease the land for 99 years in 2017, at the same time the team also agreed to lease Coors Field itself for 30 more years for $200 million.

Keli McGregor’s widow and children helped unveil the name of the development.

Keli McGregor died suddenly in 2010 while he held the role.