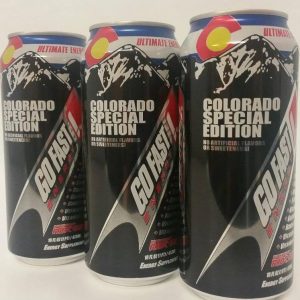 A Denver-based energy drink company is on the move.

“We’re moving out to the suburbs where we can be more accessible,” said Larry Brown, managing director. “It’s mainly a customer service-friendly move, trucks coming in and out.”

The new facility — a distribution center that includes some office space — is 5,000 square feet, an increase from its 3,800-square-foot space in Denver.

Go Fast, founded by professional skydiver Troy Widgery, has been based in Denver since it opened in 2001.

“We survived all the big boys like Red Bull and Monster and Rockstar … That was back in the day when the huge energy (drink) boom was taking place,” Brown said. “Hundreds and hundreds of them came and went, and Go Fast is a survivor.”

Brown, who came to Go Fast three years ago following a 12-year run with Red Bull, said Go Fast produces drinks with healthier ingredients, such as Stevia and natural honey.

“We don’t have that jittery crash,” he said. “We use superior ingredients.”

Go Fast is distributed in more than 30 states and available at grocery chains, convenience stores and gyms.

Although Go Fast is heavily involved in the motorsport industry — it’s a sponsor of Bandimere Speedway in Morrison — Brown said the company has expanded its customer base beyond extreme athletes.

Go Fast has been around since 2001. “We survived all the big boys like Red Bull and Monster and Rockstar,” an exec says.

Where can I buy Go Fast energy drink in Omaha Nebraska ?

Where can I buy Go Fast energy drink in Williston North Dakota ?