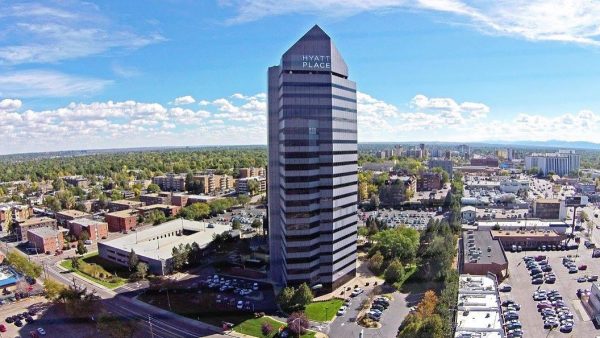 The 20-story office building at 4100 E. Mississippi Ave. in Glendale, known as Elevate, sold for $35.75 million. (Photos by Thomas Gounley)

The tallest building in Glendale — nicknamed the Darth Vader building because of its ominous look — has changed hands.

Matador is managed by Brad Cummings, a former senior director with CBRE Global Investors who said in an email that he buys office and industrial assets in California and Colorado.

“This is my fifth commercial acquisition and I generally operate in the middle-market deal size range under institutional interest where I can find better risk-adjusted returns,” Cummings said. “On Elevate, I led the acquisition and brought in two of my programmatic capital partners called Urban Green Investments and Copper Beech LLC.”

The property was sold by Westside Investment Partners, which purchased it in September 2015 for $25.25 million, according to records. CBRE brokers Mike Winn, Tim Richey, Chad Flynn, Jenny Knowlton and Charley Will represented the seller.

Westside Principal Andy Klein said Elevate is 93 percent leased, up from 75 percent when the firm purchased it. He said the federal Department of Veterans Affairs, which occupies about 25 percent of the leased space, is now on a long-term lease, after having previously been month to month.

Klein said Westside, which has its offices in the building, spent about $2 million renovating the lobby and other common areas. 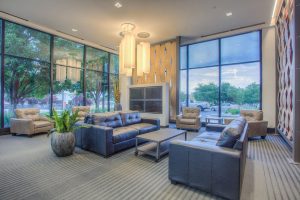 The building’s nickname — a reference to a villain in the “Star Wars” franchise — isn’t the only thing quirky about the structure.

“Most people, even in the real estate industry, don’t know it’s an office building,” Klein said.

That’s because the office building is topped with Hyatt Place signage. The hotel, however, operates in a smaller structure next door.

Klein said both buildings were constructed in the 1980s. The taller structure was supposed to be a hotel, he said, but the hotel market tanked midconstruction, and the developers made the decision to shift the rooms to the smaller structure.

The office building always has been topped with signage for the hotel, Klein said. For years, the hotel was the Loews Giorgio; it reopened as a Hyatt Place in 2013.

It was Westside that named the office building Elevate. Prior to that, it was known as Mountain Towers — despite its singular nature. Klein said the developers originally planned to build three buildings.

Westside is the new owner of the former Loretto Heights campus in southwest Denver, having paid $16.5 million for the 75 acres last year. The firm also owns more than 1,000 acres near Denver International Airport, and sold land in Colorado Springs this year to fast-food chain In-N-Out Burger.

The sale of Elevate is the second eight-figure office sale this year for Glendale, which is home to about 5,000 people and surrounded by the city of Denver. The 10-story building at 425 S. Cherry St. sold for $13.6 million in late January.

The 20-story office building at 4100 E. Mississippi Ave. in Glendale, known as Elevate, sold for $35.75 million. (Photos by Thomas Gounley)

Seller: “Most people, even in the real estate industry, don’t know it’s an office building.”