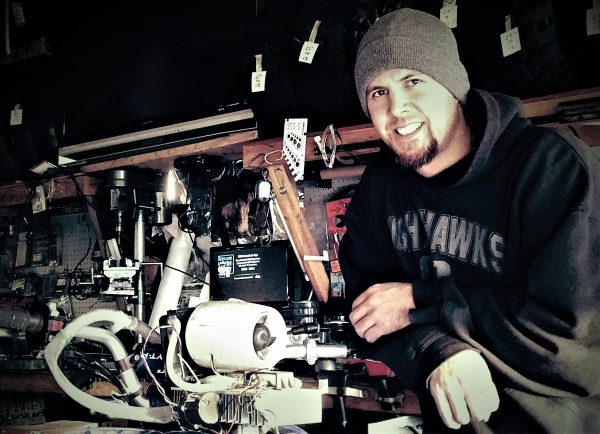 “Most people think of motorcycles as always going fast,” he said. “But any time you’re on normal roads, you’re stopping and going, so the air isn’t always passing by you — and the air passing by you isn’t always cool air. If you’re somewhere hot, it really is overwhelming how hot it gets in traffic or at stoplights.”

Hammond, who owns motorcycle repair shop Hammond Brothers Motorsports in Aurora, was living in Florida when he decided he was tired of that discomfort.

But Hammond, 35, couldn’t find any kind of motorcycle cooling device on the market, and air compressors used to cool down cars are too big for bikes. Motorcycle lifestyle publications, meanwhile, offer tips that range from soaking clothing pre-ride to wearing ventilated gear, but most are geared more toward preventing medical issues than addressing the comfort factor.

So Hammond took on the job himself, with only the Internet and memories of his college thermodynamics class in his toolbox.

Eight years later, in last November, Hammond was awarded patents on two inventions meant to keep motorcyclists cool. The devices — an air-conditioning unit and a fan — are mounted on the handlebars. 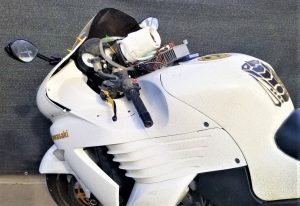 The air-conditioning unit uses a thermoelectric cooling technology, which uses electricity to release cold air, rather than a circulating liquid refrigerant used in vapor-compression refrigeration (the most common method used in car air conditioning). Thermoelectric coolers are smaller and more flexible than vapor-compression refrigerators, and are commonly used in wine coolers or minifridges.

“I had an idea for how it could work, and then just started doing research,” said Hammond, who moved to Colorado with his wife seven years ago. “They use (thermoelectricity) a lot in science — I thought I could use that technology and add to it.”

It took him about four years to develop viable prototypes, he said, but that was only the beginning.

“I didn’t know how to get a patent, and I didn’t know anybody who knew how,” Hammond said. “I was going in blind.”

The 4½-year road from prototype to patent was longer and more expensive than most, he said. Hammond went through two lawyers and four prototype-development companies, and spent about $21,000 in total to patent his motorcycle-cooling devices. He said that on average, patenting a product costs between $7,000 and $10,000. Hammond said he had to get a loan to fund part of the process.

But even after all that, his inventions are working models, not products ready to be mass-produced.

“That’s the hardest thing to do with a product, making it manufacturable,” Hammond said. “The prototype is only a prototype. There’s a huge process going into manufacturability. I’ve gone through four different prototype companies, and all four ripped me off.”

Troubles with these companies and his original patent lawyer caused the long delay, during which time all six of Hammond’s original investors walked away, thinking he never would be granted a patent. But despite the setbacks, he’s not ready to quit. 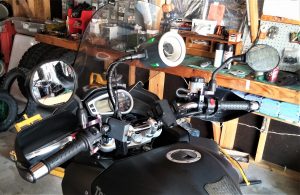 The mountable fan is much closer to manufacturability than the air-conditioning unit, which he said still has “a long way to go.”

“My plan is to finish the turbofan product, and then sell enough of them to finally start and finish the air conditioner so it becomes a manufacturable product to start selling or license out,” he said.

Though Colorado summers are more forgiving than the Florida heat that spurred his invention — and despite the lengthy setbacks — Hammond said he often uses his products.

“The prototypes aren’t exactly pretty,” he said. “But yeah, they work great.”

“I didn’t know how to get a patent, and I didn’t know anybody who knew how,” Bruce Hammond said. “I was going in blind.”