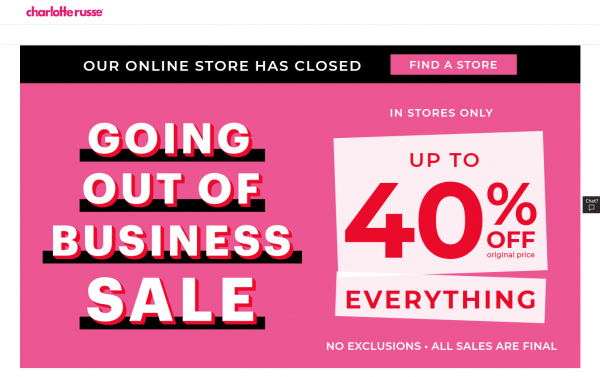 Women’s clothing retailer Charlotte Russe will close its remaining stores, which include five in the Denver metro area.

Charlotte Russe Holdings Corp. announced the move last week, saying it planned to liquidate its inventory and was in negotiations to sell its intellectual property. The move come in the wake of the company filing for Chapter 11 bankruptcy protection in February.

Prior to filing for bankruptcy, the company operated more than 500 stores in 49 states and Puerto Rico under the Charlotte Russe and Peek Kids brands. Upon filing, the company told Business Insider it would immediately close 94 stores, which included Charlotte Russe stores in Pueblo and Grand Junction. Overall, it still has 416 stores to close.

Now, the state’s remaining seven Charlotte Russe stores — five in the Denver metro area, and one apiece in Loveland and Colorado Springs — will meet the same fate, along with the state’s sole Peek Kids location at Park Meadows mall in Lone Tree.

All the company’s stores are slated to close by the end of April. Liquidation sales began last Thursday.

California-based Charlotte Russe was founded in 1975, and acquired Peek Kids in 2016. SB360 Capital Partners said the chain’s annual sales peaked at $986 million in 2016. CNN reported that the company’s sales dropped from $928 million in 2017 to $795 million last year, a decrease of more than 14 percent.

The move comes in the wake of the company’s February filing for Chapter 11 bankruptcy protection.