One of Denver Central Market’s tenants is beefing up.

The Local Butcher will open a second location at the Oneida Park shopping center in Park Hill this April, owner and head butcher Justin Herd said this week.

The store at 2242 Oneida St. will be bigger than the original, both in size and scale.

“The second location was actually what I originally wanted to do,” Herd said. “It will be a full butcher shop and also a full deli. We’ll be selling sliced deli meat, sliced cheese, grab-and-go deli sandwiches, and a smaller menu of made-to-order deli sandwiches.”

The butcher shop will continue to operate at RiNo’s Denver Central Market, where it’s been since 2016, Herd said. The shop sells fresh meat along with a smaller menu of made-to-eat items, including a meatball sandwich, Italian beef and barley soup, pulled Italian beef and sliced prime rib.

“When the Central Market opportunity came up, it was the perfect opportunity to get in and get our brand established,” he said. “We had a great reception for what we offer and what we’re trying to build. But we’re limited in space at the market — we’re working with 450 square feet.”

The new 1,600-square-foot storefront in Park Hill will allow the butcher shop to display more of its cuts, Herd said, as well as expand its offerings to include wild game, including elk, bison and venison. 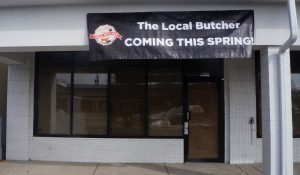 The Local Butcher is opening a second location in Park Hill this April.

“We’ll be utilizing the whole animal in a different form than we do now,” he said. “We’ll be highlighting all the different cuts people may or may not know about.”

Herd said his butcher shop sources the vast majority of its meat from Colorado. For meats he’s unable to source locally, he partners with farms in Omaha, Nebraska, that “meet the same standards.”

The Oneida Park shopping center, owned by Todd Snyder and Rick Firmine, is a full city block of neighborhood retail that recently completed a multimillion-dollar upgrade. Herd said the developer approached him about moving into the space.

“It was a natural fit,” he said. “They’ve put a commercial block right in the middle of a residential area, and they’re plugging in tenants to make it a neighborhood destination. That works for us — we’re a neighborhood butcher. People come in and they see the same people every time. There’s a relationship there that we’re trying to bring back.”

Herd signed a five-year lease on the space and plans to expand his staff. When the new butcher shop opens in April, it will operate from 9 a.m. to 6 p.m. every day but Tuesday and Sunday. The shop will be closed on Tuesdays, and will be open from 10 a.m. to 4 p.m. on Sundays.

And The Local Butcher doesn’t plan to stop at two locations.

“This location is just the start of what we want to do expansionwise,” Herd said. “We want five stores on the Front Range — that’s the goal.”

The Local Butcher’s new location will be more than three times the size of its first one, which means more cuts of meat and ready-to-eat options.