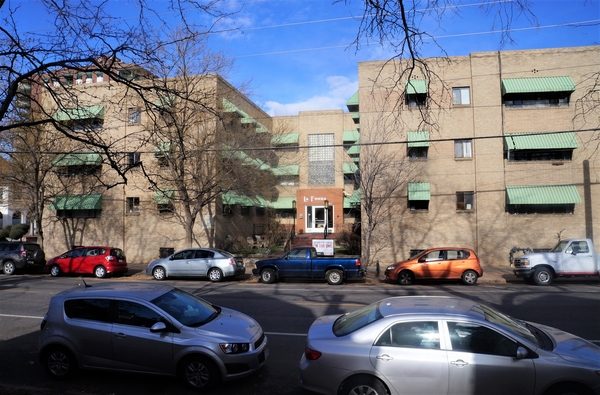 The recent sale of an apartment building in Capitol Hill has launched a court battle.

Brockman said he and Fenn had agreed to team up and buy the building, but that Fenn then went behind his back and sold the building to Denver-based RedPeak. Brockman is accusing Fenn of fraud and breach of contract.

“Your word is your bond. Always,” Lauren Thompson, an attorney for Brockman, said in an email. “It is sad that not everyone agrees.”

Fenn, however, said he plans to “fight his frivolous claims vigorously.”

“Mr. Brockman’s claims against me are a prime example of how a person can abuse the judicial system in an effort to achieve undeserved financial gain,” he wrote in an email.

According to the complaint, Fenn took over management of La Fonda in 2015 and developed a close professional relationship with the building’s trustee, Bruce Rogoff.

Rogoff eventually told Fenn that, when Rogoff’s mother passed, he would give Fenn the option to either purchase the building or act as listing agent in the sale of it.

Brockman and Fenn met on a backcountry hut trip about three years ago, and struck up a friendship and professional relationship, according to the lawsuit.

When Rogoff’s mother died in August, Fenn asked Brockman “to partner with him with respect to the Buy-Sell Option” involving La Fonda, the lawsuit said.

Brockman agreed to do so, and the pair decided it was in their best interest to buy the apartment building, as long as an appraisal indicated they could make a profit by renovating and flipping it, according to the lawsuit.

The complaint also said Brockman and Fenn discussed the fact that Brockman would fund the purchase of the building, either personally or through bank loans.

Brockman claims that, between August and early October, he did a host of tasks on behalf of the partnership, including selecting and working with an appraiser, getting a bid on a needed roof replacement and reviewing a bid for a new boiler that Fenn had obtained months earlier.

The appraisal valued the building at $4.6 million, according to the lawsuit. In early October, the pair agreed to offer Rogoff $4.2 million.

According to the lawsuit, Fenn requested that Brockman put the purchase agreement in his name only, saying that Rogoff “would be more comfortable” with the agreement, given the two’s personal relationship. Brockman agreed to the request.

Upon receiving the offer, Rogoff countered at $4.29 million, which Fenn and Brockman agreed to accept, the lawsuit said.

The contract was executed on Oct. 15, the complaint said. Afterwards, Brockman and Fenn met to discuss the financial details of their agreement. Fenn decided to pay the earnest money himself, but they also discussed whether it made sense for Brockman to buy out Fenn’s interest in the partnership, as Brockman “was more liquid,” the complaint said.

In the coming days, the pair continued to converse about upcoming deadlines related to the closing of the sale.

In a phone call on Oct. 31, Fenn told Brockman that he “needed to do something for his family,” and that he had assigned his rights in the purchase contract to RedPeak, the lawsuit claims.

Brockman later learned that, prior to the conversation, Fenn and Rogoff had executed an agreement assigning all rights to purchase La Fond to RedPeak, the lawsuit alleges.

Brockman said in the lawsuit that he subsequently contacted RedPeak regarding “his efforts from which RedPeak stands to unjustly obtain the benefit,” but that the company said it would proceed with the purchase and that “deals this good only come around once every ten years.”

Brockman alleges that RedPeak is paying Fenn hundreds of thousands of dollars in connection with the agreement, but that neither party will disclose the sum.

RedPeak purchased the apartment complex for $4.29 million on Dec. 13, according to county records.

The company is also named as a defendant in Brockman’s lawsuit.

“Mr. Brockman’s lawsuit is frivolous and without merit. Beyond that we have no additional comment,” said Bobby Hutchinson, RedPeak chief investment officer.

Brockman is seeking at least half of the sum he alleges RedPeak is paying Fenn, and compensation reflecting the profits he could have made had the fix-and-flip plan proceeded.

“As a result of their multi-year relationship and their having been introduced through a trusted confident, Mr. Fenn and Mr. Brockman stood in a relationship of confidence that caused Mr. Brockman to relax the care and vigilance he would ordinarily use when dealing with a stranger,” the complaint said.

Correction: This story has been updated to include a photo of the apartment building at the center of the lawsuit. The story was originally published with a photo of an unrelated building.

I am a licensed real estate broker here in CO. Upon reading this story (and provided the main points are factually correct) I would think it is Mr. Bruce Rogoff (the property seller) that has a potential suit against the broker and buyer/participants in the transaction. It would appear that Mr. Rogoff sold the property to the buyers for well under current market value and was likely not informed of the current market value because Fenn’s and Brockman’s interests were aligned in opposition to Mr. Rogoff. Fenn had formed a long-term relationship with Rogoff (a property management client of Fenn) and Brockman (a potential buyer/partner of Fenn). Fenn had certain fiduciary responsibilities to both parties by virtue of his license under Colorado Revised Statues and Colorado Real Estate Commission regulations. If the plaintiff’s recitations of fact in the case are correct, it would appear that Fenn placed his own personal gain and interests above those of both of his clients (both Rogoff and Brockman). I am not an attorney, but as a real estate broker, Fenn should have never attempted partnering with Brockman on the purchase of the property or signed a contract to purchase it unless Rogoff was fully informed and in agreement with the arrangement at for below-market price. If I were in Fenn’s shoes, I would have simply taken the listing, and then open-marketed the property for sale for the benefit of Rogoff to the best and most qualified buyer, whether that buyer was ultimately Brockman, RedPeak, or someone else. This is the sort of nightmare that happens when a broker takes advantage of a client for his/her own personal benefit. Ultimately, the Colorado Real Estate Commission may weigh in on this as well should a complaint be filed.