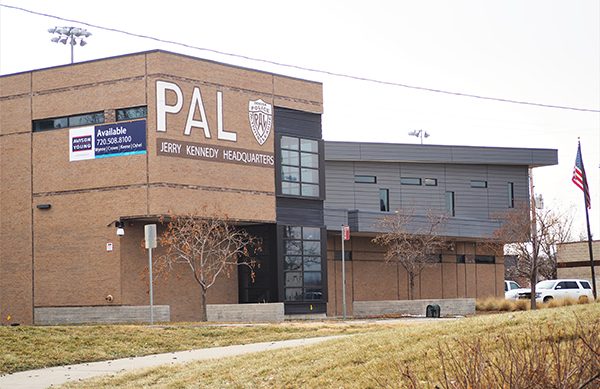 The Denver Police Activities League, a nonprofit, is looking to sell or lease its current headquarters, at 1240 W. Bayaud Ave. (Thomas Gounley)

Less than a decade ago, the Denver Police Activities League built itself a gleaming headquarters along the Platte River.

Now the nonprofit — which organizes activities, primarily sports leagues, for inner-city youth — is looking to move out.

What is the problem, or just the reality, is that “Denver got flipped on its head the last 10 years,” as Schroeder puts it. The city’s economic boom, and associated spike in real estate valuations, is prompting PAL to make some adjustments.”

One reason? The kids the nonprofit serves aren’t living where they used to.

“Some of these neighborhoods that traditionally provided us with a lot of our kids are gentrifying at a massive rate,” Schroeder said. “Swansea, Globeville was a real hotbed for us in the past, and now look at the real estate up there. It’s nuts.”

Oshel said some of his team’s early conversations about the building have been with tech companies, who might be drawn to a space with a rock wall. But he said it could be a fit for a wide range of tenants.

There are locally run police activities leagues across the country. They aim to build relationships between children who could use a mentor and law enforcement.

In Denver, the city’s police department provides two full-time officers to PAL, at no cost. The organization otherwise survives on grants and donations. Schroeder said PAL’s annual budget is about $500,000, and it serves 3,000 to 4,000 kids a year.

Unlike the YMCA or the Boys and Girls Club, the Denver PAL typically doesn’t host its sports leagues at its building, Schroeder said. Games are held in parks around the city and include kids from the surrounding neighborhood.

Still, as the rock wall suggests, when the building opened in February 2010, PAL did envision it would get a little more use.

“All the intent was there to have this be a destination for youth, but the youth aren’t living here anymore,” Schroeder said of the surrounding neighborhood.

Schroeder said the facility’s rock wall and related feature do get some use. But on the whole, the building is underutilized. The two policemen account for half of PAL’s staff.

“It’s expensive for us to stay here with just four people in the building,” Schroeder said.

PAL staff likely will move elsewhere when a buyer or tenant is found. Bailing on the building within a decade doesn’t mean building it was a mistake, Schroeder said. In fact, it was essentially a mandate.

The Denver PAL was founded in 1969 following a donation from Bill Daniels, who saw Denver police officers teaching kids to box and wanted to grow their efforts. Daniels, a Greeley native, was a pioneer in the cable television industry and died a billionaire in 2000.

Schroeder said that in Daniels’ will, he left money for the Denver PAL, specifying the organization was to build itself a home and name it after his friend Jerry Kennedy. PAL spent $3.2 million to acquire the land and construct the facility.

Schroeder said leasing or selling the building will provide PAL with another source of revenue, and that now makes the most sense for the organization.

He thinks Daniels would understand.

“We just have to change our tactics over time to make sure we’re effective,” Schroeder said.

The Denver Police Activities League, a nonprofit, is looking to sell or lease its current headquarters, at 1240 W. Bayaud Ave. (Thomas Gounley)

I might be interested in buying the property, but first I need to see the rock wall. Do you have a picture?

Hi, Todd. Reporter here. Thanks for reading. There are a number of photos of the interior, including one showing the rock wall, here https://www.loopnet.com/Listing/1240-W-Bayaud-Ave-Denver-CO/14293785/

Hi Todd, I would be happy to email you additional photos and a brochure if you are interested. I am the listing broker and my email is jaimee.keene@avisonyoung.com