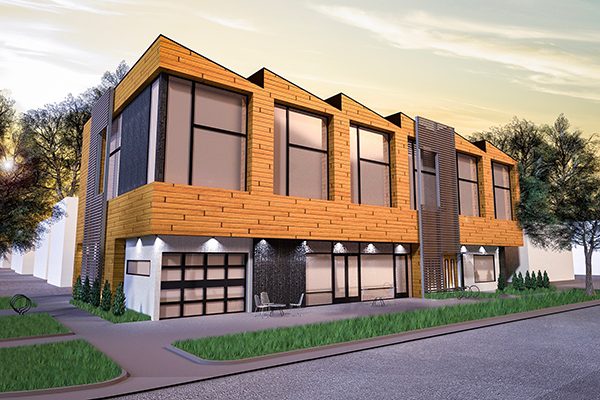 A rendering of the proposed development. (Courtesy of FMS)

A developer wants to revamp a vacant restaurant property in Whittier, incorporating the small building on the lot into a two-story mixed-use project.

The 0.11-acre lot, four blocks west of City Park Golf Course, is currently home to a 795-square-foot building and a dozen parking spaces.

“The sawtooth roofline will hold west-facing clerestory windows meant to catch the sunset and bring that nice light into the residences,” Ali said.

There would not be any on-site parking.

FMS purchased the property in July 2016 for $350,000, according to county records. The property has been vacant since Jammin’ Joe’s BBQ closed in 2014; prior to that, a restaurant called Frank’s Kitchen operated at the site.

“It’s been underutilized for so long,” Ali said.

Ali’s development experience has been entirely residential; he’s built two single-family homes and an eight-unit condominium project, all in the Washington, D.C. area.

Ali said he owns a couple of condos in Denver that he rents out, and visits the city and Colorado regularly to engage in his passion of off-road motorcycling, as well as to see his best friend from college.

“He lives right there,” he said. “I always stay in Whittier.”

Ali said he’s incorporating commercial space into the project because of neighborhood demand. He anticipates a restaurant tenant.

Ali has hired Denver’s Design Platform to handle design and construction. He hopes to begin work next summer.

A rendering of the proposed development. (Courtesy of FMS)

How could any right-minded city official approve a building plan like this that does not include on-site parking? This type of oversight on the part of planning officials is killing our neighborhoods.