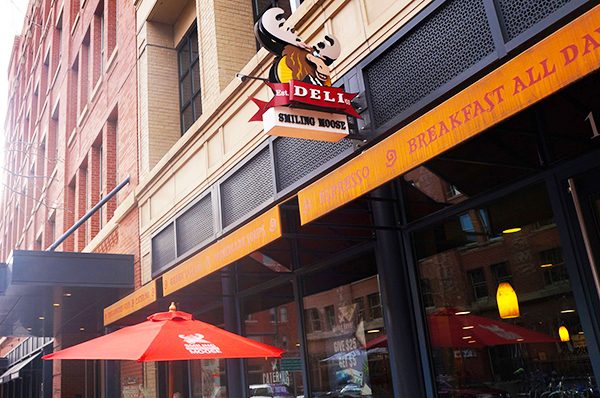 A sandwich shop near Union Station is facing possible eviction.

Rightway Brands Inc., which does business as Smiling Moose Rocky Mountain Deli, was sued last week by its landlord at 1517 Wynkoop St., who said the eatery is behind in rent by more than $25,000.

Landlord Invesco Real Estate, which owns the building as Wynkoop Owner LLC, is asking a judge to award it damages, along with possession of the store.

Asked for comment, Smiling Moose Vice President John Brown said in an email, “We plan on having this rectified with the Landlord before the end of the month.”

Invesco said in the lawsuit that Smiling Moose signed an eight-year lease for 2,645 square feet on the ground floor of the building in 2010.

The lease later was extended four years and now runs through November 2022,

Invesco said Smiling Moose has failed to pay portions of its July through November monthly rent and owes a total of $25,769.

Rachel L. Burkhart and Richard Reichstein with Faegre Baker Daniels are representing Invesco in the litigation.

Smiling Moose was founded in 2003 in Edwards. According to its website, the chain now has five locations in Colorado, including one other one in Denver, by the DU campus. The company also has some out-of-state locations.

Smiling Moose’s website indicates the company is based in Denver.

Smiling Moose Rocky Mountain Deli exec: “We plan on having this rectified with the Landlord before the end of the month.”

So, we can expect the Smiling Moose BK filing any second now?