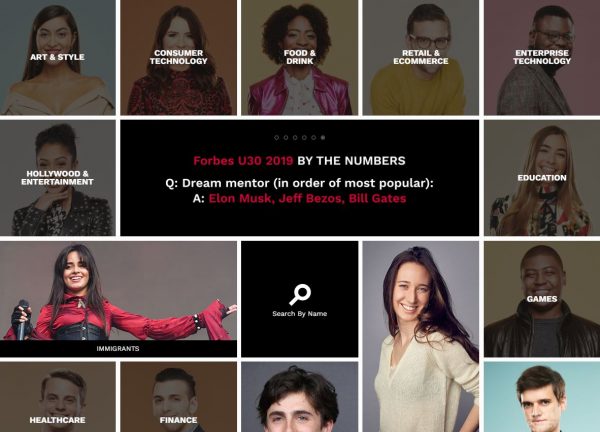 A screenshot of the Forbes “30 Under 30” landing page. The 2019 version of the annual feature was released earlier this week.

Six Colorado residents, including a 12-year-old in Lone Tree, have been included on Forbes’ 2019 “30 Under 30” feature, which was released this week.

The magazine said its annual feature chronicles “the brashest entrepreneurs across the United States and Canada.”

Forbes released a “30 Under 30” list for each of 20 industry categories, from “education” to “venture capital” and “healthcare,” meaning 600 young people were chosen.

Here are the individuals whose profiles indicated they live in Colorado:

Description: “Twelve-year-old Gitanjali Rao took the top prize in the 2017 Young Scientist Challenge for her lead-detection device, which is capable of finding lead in drinking water with the aid of a mobile app. She’s currently working to refine and commercialize her device.”

Description: “When Daniel Katz dropped out of college after just three months in 2013 to move to Los Angeles and hawk his own line of energy drinks, his intense selling schedule found him eating protein bars instead of real meals. But the whey protein (a dairy byproduct) upset his stomach, and gave him a new product idea: a high-protein but low-sugar and dairy bar. By May 2015, his first No Cow bar was on grocery store shelves and has taken off from there. The Denver-based company has raised $100,000 in funding from blue chip investors like General Mills’ venture capital arm and recorded $10 million in 2017 revenue. The line is now sold at more than 15,000 stores nationwide.”

Description: “Though just 23 years old, Mikaela Shiffrin has already won three world championships and two Olympic gold medals; that latter achievement ties the record for most Olympic gold medals won by an American alpine skier. Shiffrin’s won the slalom season title in five of the last six years, and her first such win, in 2013, made her the youngest skier to ever achieve the feat.”

Description: “The righthand man at the think tank Rocky Mountain Institute for founder Amory Lovins, Ryan Laemel leads its Urban Mobility Lab, and is focused on partnering with the Indian city of Pune to implement solutions for traffic management, public transit and electric mobility. At Yale, he created the first university-based internal carbon pricing program.”

Description: “During Ramy Badie’s first year in medical school, he entered a T-shirt design contest to win money for tuition. He ended up dropping out to found TeeTurtle, which makes apparel, toys and games featuring its own designs and licensed characters from Disney and Marvel. TeeTurtle is on track to generate more than $20 million in revenue this year.”

Description: “As a Ph.D. student at MIT, Joel Jean was a member of a research team that developed record-thin and lightweight solar cells. He’s co-founder of Swift Solar, which aims to develop lightweight, flexible, and efficient solar panels based on metal-halide perovskites.”

A screenshot of the Forbes “30 Under 30” landing page. The 2019 version of the annual feature was released earlier this week.

The business magazine released its annual feature, which recognizes 30 individuals in each of 20 industry categories, this week.