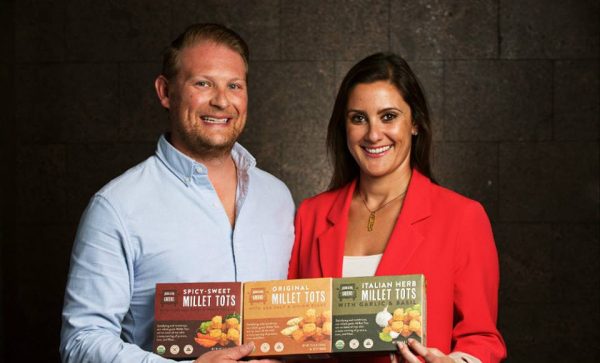 Lindsey and Ryan Cunningham founded RollinGreens. Ryan came up with the idea for the brand’s millet tots that are now in 1,200 grocers nationwide. (Images courtesy of RollinGreens)

A Boulder-based food brand specializing in “millet tots” — think tater tots without the potato — has cooked up a fresh batch of investments.

“Part of these new funds are going to go towards supporting retail growth and inventory,” said Lindsey Cunningham, who founded RollinGreens with her husband Ryan. “We’re also going to be investing in marketing to expand our growth.”

The brand started as a food truck in 2011 before turning to packaged goods in 2015. When the pair began developing their idea for a food truck, they learned, to their surprise, that Ryan’s parents also had operated a natural food truck in the 1980s.

“Ryan’s been a chef for a long time and I have a background in marketing and PR, but we didn’t know about our family heritage until we started a food truck,” said Cunningham, who also serves as RollinGreens CEO. “We kind of revitalized it by keeping the name and some of the food options.”

The second-generation food truck business was “tremendously successful” for five years, Cunningham said, but the pair shifted to packaged goods to increase the brand’s scope and ease their workload.

“We wanted to reach more consumers, and the food truck was such a labor-intensive business that always came down to Ryan and myself,” Cunningham said. “We didn’t take a vacation for five years; that was our life.” 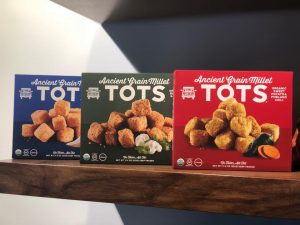 RollinGreens currently offers three flavors of millet tots: original made with onion and sea salt, Italian Herb made with basil and garlic, and Sweet-Spicy made with sweet potato and poblano chili.

The truck’s most popular menu item was Ryan’s unique millet tots, so when the pair began to shift into packaged foods, the tots were a natural focus.

The company’s website describes millet as a “pseudo-grain” that has “one of the lowest water requirements of any grain crop.” Cunningham claims the tots are the only non-potato, whole-grain tot on the market.

“Ryan grew up with millet on his dinner table, because his mother owned a plant-based culinary school,” she said. “He put together what he grew up with and brought it back with a modern twist.”

The millet tots have been manufactured at a co-packing facility in Denver, Cunningham said.

Until last year, the tots were available in only one flavor: onion and sea salt. The brand since has added two flavors, Italian Herb and Sweet-Spicy. The 11.5-ounce boxes, which contain 3.5 eight-tot servings, generally retail for $4.99.

Cunningham said the millet tots are sold in about 1,200 stores nationwide.

“At first we were focused on natural-leaning grocers, but we found that everyone wanted the tots, even conventional grocery stores,” Cunningham said. “At this point, it’s probably about 50-50 between conventional and natural grocers.”

Colorado supplies more than half the millet in the United States, and RollinGreens sources almost all its ingredients from its home state. The millet used in the brand’s tots comes from a 100-year-old farm in Sterling, Cunningham said.

Lindsey and Ryan Cunningham founded RollinGreens. Ryan came up with the idea for the brand’s millet tots that are now in 1,200 grocers nationwide. (Images courtesy of RollinGreens)

Boulder-based RollinGreens hopes to raise $300K more, according to an SEC filing. The brand began as a food truck before shifting into packaged goods.