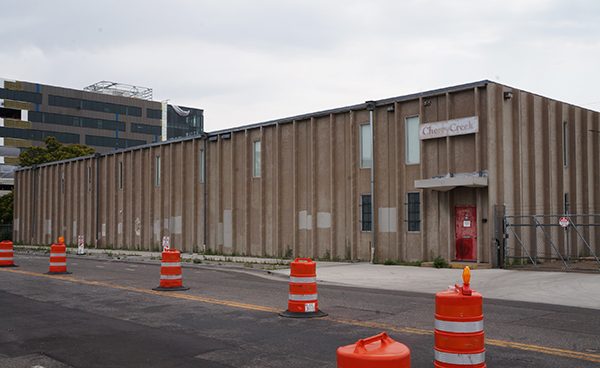 Houston-based Hines and partners have bought 3500 Blake St. in Denver, which is currently home to an industrial building. (Thomas Gounley)

Developer Hines has purchased a RiNo site where it plans an office project.

According to county records, the Houston-based company, along with partner Chicago-based McCaffery Interests and an unnamed institutional investor, paid $11.25 million on Thursday for 3500 Blake St., an industrial property that has been used by Vitraform, a glass sink manufacturer.

For comparison, Denver-based Zocalo Development just paid $211 per square foot for a 0.72-acre site across the street, where the company plans a 13-story apartment complex.

BusinessDen reported in August that Hines — the developer behind Denver’s newest skyscraper, the 40-story 1144 Fifteenth — and McCaffery were under contract for the Blake Street site.

Chris Crawford, director of Hines’ Denver office, said in a statement Friday that the partners plan to build “the next generation of the T3 office product” at the site.

Hines’ inaugural T3 building — the name stands for timber, technology and transit — was built in Minneapolis. The seven-story, 221,000-square-foot structure, whose tenants include Amazon, was completed in 2016. Hines sold the building in May, and has announced plans to develop T3 buildings in Atlanta and Chicago.

Crawford said the Denver T3 building will be six stories.

“The neighborhood has a unique, authentic character that has charmed us,” Crawford said. “Combine that with the amenities, and RiNo is Denver’s most vibrant area. We believe that the neighborhood coupled with the T3 concept will perfectly match the needs of the creative class office tenants targeting Denver.”

The property was sold by Jerry Fein, who owns Vitraform with his wife Sheila. Fein told BusinessDen in August that he bought the building in 1986 and put it on the market three years ago, well aware that the longtime warehouse district was becoming a development hotspot.

Prior to Hines, Fein said, the property was under contract twice, once to Chipotle, which considered building its headquarters at the site before lease space in 1144 Fifteenth, and then opting to leave Denver altogether for Southern California.

On the same day Fein sold his RiNo property, he purchased another industrial site off Colorado Boulevard north of Interstate 70, paying $5.4 million for 4101 E. 48th Ave., according to county records.

Houston-based Hines and partners have bought 3500 Blake St. in Denver, which is currently home to an industrial building. (Thomas Gounley)

The former industrial property sold for $225 per square foot, $14 psf more than a large site across the street that an apartment developer snatched up in late October.