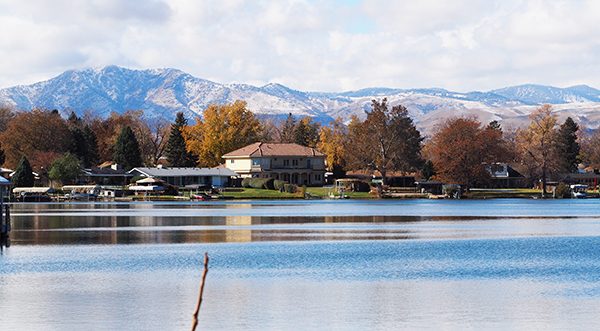 Riviera Lake, located in Harvey Park, is ringed by about 35 residences that make up the Riviera Circle Lake Club, a homeowner’s association. (BusinessDen file photo)

A Denver Realtor is in deep water with the buyers of multiple waterfront properties he listed.

“He knew the truth and he didn’t disclose it to our clients,” said attorney David Chipman of Chipman Glasser, who is representing the plaintiffs. “In fact, he represented just the opposite.”

“We take seriously the allegations being made, but we stand firm that these accusations are unfounded,” he said. “My counsel is handling these claims in the court of law, so at this time we are unable to disclose information or further comments.”

Riviera Lake, located in Harvey Park near the intersection of Evans Avenue and Sheridan Boulevard, is ringed by about 35 residences that make up the Riviera Circle Lake Club, a homeowner’s association.

According to the lawsuit, Travers lives in one of the homes and has served on the association’s board. In 2006, the board hired a water consulting firm to research whether the association had the right to store water from Clear Creek in the lake for more than 72 hours.

“A Water Storage Right is necessary to guarantee use of Riviera Lake for fishing, boating, waterskiing, and recreational purposes,” the lawsuit reads.

The firm, Blatchley Associates, concluded that the association did not have the water storage right, according to the lawsuit. The board reviewed Blatchley’s conclusion “but decided to do nothing unless the issue came to a head,” the lawsuit said. 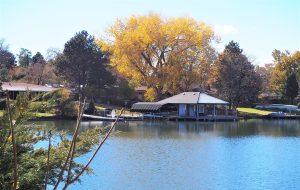 The defendant has listed and sold multiple homes with private docks along Riviera Lake, such as the one pictured above. (BusinessDen file photo)

Travers has listed and sold multiple homes along Riviera Lake, according to the lawsuit.

Travers repeatedly advertised that homeowners had access to the lake for recreation, including water skiing, boating, fishing and ice skating, according to the lawsuit.

An MLS listing for the home purchased by Orr said, “Riviera Lake owners have the only association that owns the water rights and have private docks for your boats,” according to the lawsuit.

Additionally, when asked by the Vinings’ agent in 2014 about who owned the lake, Travers said, “The property owners own the lake and water rights in common and they go back to the late 1800s and are worth between $50,000 and $75,000 per home,” according to the lawsuit.

The lawsuit alleges that Travers was aware of that conclusion reached by Blatchley Associates because he served on the association’s board.

In February 2017, the association received a letter from a Colorado Division of Water Resources staffer, who said, “I am not aware of a decree that awarded a storage right in Riviera Lake for more than 72 hours.”

“Without a storage right, water cannot be held in Riviera Lake for more than 72 hours,” the letter said. “Please let me know if you are aware of a decree that allows storage of Clear Creek water in Riviera Lake. Otherwise, I may be required to order the release of all water improperly stored.”

Last year, the neighborhood board filed an application to acquire water storage rights for water diverted from Clear Creek. According to the lawsuit, the application still is pending, and opposed by entities that include Denver and three other cities.

The plaintiffs say they would not have paid the price they did for their homes if they knew the association did not have the storage right. They say they have had to pay additional HOA fees in an attempt to acquire the proper water storage rights.

“This ongoing effort costs our clients money, money they would not have to spend if he (Travers) had been upfront from the beginning,” Chipman said.

Orr also said in the lawsuit that he’s been unable to refinance his mortgage because the value of his house is unclear.

Reached by BusinessDen, Kevin Rein, state engineer with the Colorado Division of Water Resources, said Wednesday it was unclear how the lake was built without proper storage rights. He said the homeowners do have a storage right for water diverted from Bear Creek, but that isn’t the source of the water currently in the lake.

Rein said it is unlikely the lake would be drained.

“We’ll do everything we can using the water rights they do have and the infrastructure out there to help them find a way to keep the lake full,” he said. 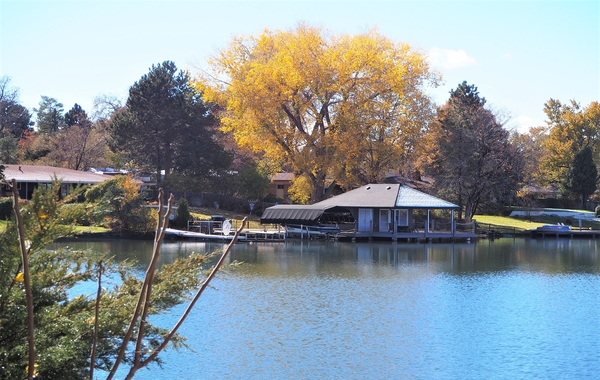 Riviera Lake, located in Harvey Park, is ringed by about 35 residences that make up the Riviera Circle Lake Club, a homeowner’s association. (BusinessDen file photo)

The four plaintiffs collectively purchased three homes listed by Steve Travers of The Kentwood Co. They allege he advertised the local HOA had water storage rights for Riviera Lake, but knew otherwise.

I wish they would also start a class action law suit regarding HOA’S, HOA’S Rape people grossly and Laws need to change to protect the consumer.