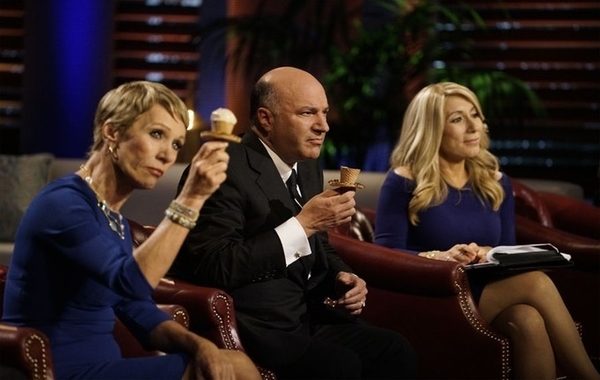 Sam Nassif and Oliver Greenland impressed at least one of the sharks on Shark Tank, as Barbara Corcoran offered $50,000 for a 33 percent share of their business if they could license the idea. (Courtesy of Drip Drop)

A crucial Kickstarter deadline of Sept. 12 looms for two Denver teens that went on “Shark Tank” in 2016 to sell their “Drip Drop” idea — an edible ring that fits around ice cream cones and prevents messes. They have little time to raise another $4,000-plus.

Sam Nassif and Oliver Greenwald, both 17 and seniors at Kent Denver, have raised $2,722 toward their goal of $7,000. When they appeared on Shark Tank two years ago, they were the youngest contestants in the show’s history at that time. They impressed at least one of the sharks, as Barbara Corcoran offered $50,000 for a 33 percent share of their business if Nassif and Greenwald could license the idea. 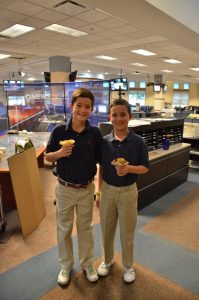 When Nassif and Greenwald appeared on Shark Tank two years ago, they were the youngest contestants in the show’s history at that time. (Courtesy of Drip Drop)

Corcoran’s team took the duo to Joy, an ice cream cone manufacturer. But because the teens lacked sales that would prove demand for their product, she withdrew her offer. Thus they’re scrambling for funds now because they face the crucial step of creating a mold of the Drip Drop. They would use the Kickstarter money to produce a steel baking sheet-like mold of the Drip Drop. That would enable them to make 24 Drip Drops at a time.

“The biggest challenge for us has definitely been the prototype,” Nassif said. “We spent a ton of time not only just creating the right batter and ingredients, but moving through, like a 3-D-printed mold, then a silicon mold. We’ve been transferring through a ton of different prototypes trying to get it right. But I think we’ve finally figured out what we need to get, and once we get it, it will be successful.”

Overall, they’ve enjoyed being entrepreneurs. Perhaps best of all, people both in the U.S. and elsewhere are interested in the product.

“We thought we’d just apply (for Shark Tank) just for the hell of it because we didn’t think we were going to make it,” Nassif said.

“Shark Tank was the greatest experience of my life,” Greenwald said. “Being on in front of 7 million people on ABC and getting the deal with Barbara was amazing. … It was definitely heartbreaking because we worked so hard on this product, and we spent so many years. But it definitely didn’t deter us from trying to make a business out of it.”

Nassif and Greenwald have been friends since their kindergarten days at Denver’s Graland Country Day School. The Drip Drop idea came to them when they entered the Gates Invention Competition in fifth grade at Graland. After seeing parents use many napkins to clean up after kids’ melting ice cream, they found a problem they could focus on and the Drip Drop became their hobby. They finished in second place, which earned them funding for a patent and to hire a patent attorney. Three years later, as eighth-graders, they got their patent.

“The production days were the most fun,” Greenwald said. “We would put our batter on these waffle irons and fold them and make them, and have our friends try our recipes.” 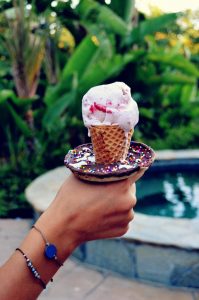 “Drip Drop” is an edible ring that fits around ice cream cones and prevents messes. (Courtesy of Drip Drop)

Nassif and Greenwald refused to give up after Corcoran stepped away. Later that year, they produced a batch of 50 Drip Drops and took them to Bonnie Brae, a well-known Denver ice cream store. After selling all 50 in three hours, they had proof of a demand for their product.

The two made an impression on Bob Pailet, co-owner of Bonnie Brae. “(Ken Simon, a co-owner, and I) were impressed by these smart young people that were creative and had an entrepreneurial spirit about them,” Pailet said. “I think they’re on a path to great success if they keep doing what they’re doing.”

“That was super fun,” Greenwald said. “Tons of random people were buying the Drip Drop, and it was really the first large-scale production we were able to do.”

Their Shark Tank appearance generated some publicity. Nassif and Greenwald have received emails from ice cream stores both local and elsewhere in the U.S. – and even one from India.

“We’ve got tons of emails from ice cream stores that have asked when we’re ready and that they want the product.” Nassif said. “We definitely have a lot lined up that we’ll be able to ship to once we have the mold.

They have invested plenty of time developing the product, including nights and weekends.

“We’ve both been entrepreneurial our whole lives,” Nassif said. “But I know that this is probably our best idea that either of us have had so far.”

Sam Nassif and Oliver Greenland impressed at least one of the sharks on Shark Tank, as Barbara Corcoran offered $50,000 for a 33 percent share of their business if they could license the idea. (Courtesy of Drip Drop)

They have a patent on their "Drip Drop" device - they sold out 50 of them in three hours at an ice cream shop - and seek funding to create a product mold for it.

do you have contact info for the ice cream kids