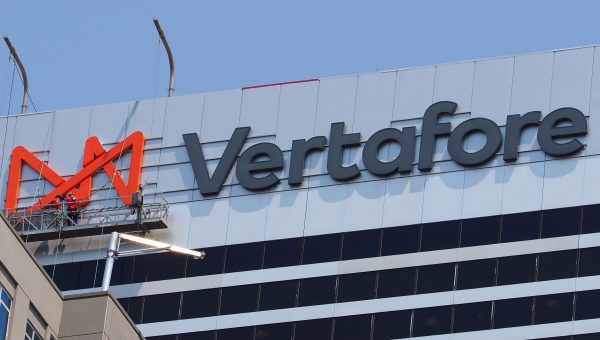 Crews could be seen this week putting Vertafore’s name and logo atop the complex’s 23-story North Tower, located at 999 18th St.

Vertafore announced last spring that it was moving its headquarters from Washington to Denver. The company, which designs cloud-based software and technology to help insurance firms process claims and quotes, received $700,000 in incentives from Colorado and Denver.

Before the move was announced, Vertafore had about 120 employees in Colorado. Just over a year later, Vertafore recently hired its 600th employee in the state and occupies 120,000 square feet across two floors of Denver Place, according to communications director Brian Brady.

The North Tower structure previously was topped by the logo of HealthGrades, which moved to 1801 California St. earlier this year.

Denver Place also has a 34-story South Tower, which does not have signage atop it. LBA Realty owns the complex.

Signage for Vertafore, which moved its headquarters to Denver last year, now graces the building.