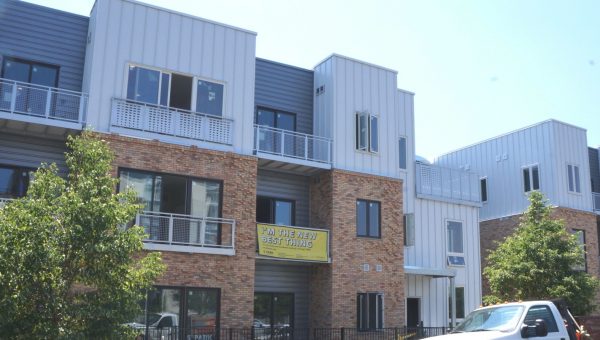 The first residents will move into S*Park, Westfield’s development in the 2500 block of Lawrence and Arapahoe streets, this month.
Credit: Thomas Gounley

Denver-based Westfield Co. is wrapping up the first phase of development on two blocks it owns in RiNo.

Westfield Development Associate Andrew Katz said the first residents will move this month into S*Park,, which has brought 91 condos to the blocks formed by Lawrence and Arapahoe streets, as well as 25th and 26th streets. Eight townhomes are also planned.

LIV Sotheby’s International Realty is marketing the units. Tres Birds Workshop was the architect on the project.

Westfield broke ground in late 2016 on the development, which also includes about 20,000 commercial square feet. Sushi restaurant Ushi has leased space at the corner of 25th and Lawrence streets, and the greenhouse above it has been leased by Altius Farms, which plans to grow lettuce on vertical columns within the space.

A yoga studio, Lacuna Yoga, also has signed on as a tenant. Katz said about 4,000 commercial square feet remain available.

Westfield also owns an adjacent block, which is undeveloped and has been used as a construction staging area. It purchased the blocks in 2015 from the Denver Housing Authority.

Katz said Westfield is still formulating its plan for the second block, and doesn’t have a development timeline.

S*Park isn’t Westfield’s only project in RiNo. The company is also building North Wynkoop, a 14-acre mixed-use development anchored by a concert venue, along Brighton Boulevard.

The first residents will move into S*Park, Westfield’s development in the 2500 block of Lawrence and Arapahoe streets, this month.
Credit: Thomas Gounley