A development team wants to turn this church at 4890 Zuni St. in Chaffee Park into a neighborhood retail hub. The proposal calls for the church to be renovated, and an additional structure to be built on the parking lot.
Credit: Thomas Gounley

A development team hopes to turn a shuttered church in Chaffee Park into an “embedded neighborhood center,” one that will offer commercial space in a residential area.

Denver-based Columbia Group and partner Paul Tamburello plan to renovate the church at 4890 Zuni St. and build an additional structure on the lot.

The partners submitted a site-development plan to the city last month. In addition to being approved, the plan also is contingent on rezoning, which the city council will consider Monday night.

The church dates to 1952, according to city records. It most recently was used by a Spanish-speaking congregation — signage reads Iglesia De Jesucristo Palabra Miel — which Fred Glick, of Columbia Group, said moved to Thornton.

“We thought it was an interesting opportunity, and we thought it would be good to bring in someone with some retail experience,” Glick said, referring to Tamburello. 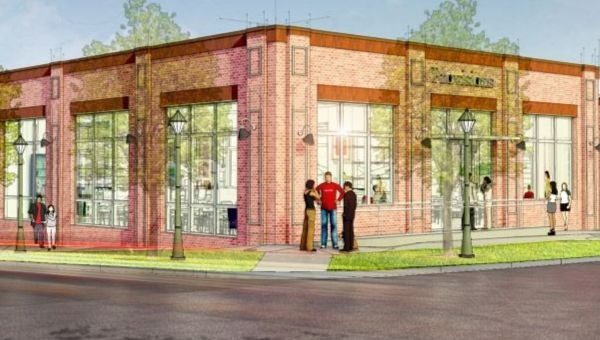 Tamburello is the owner of Denver-based Generator Real Estate and the founder of Little Man Ice Cream, which operates in LoHi and is adding four new locations.

“These smaller churches are becoming harder and harder for congregations to manage,” Tamburello said.

Tamburello said he’s not aware of any other churches in Denver that have been converted into retail space. He said the church is a “very basic, sort of pedestrian” building, so the finished project won’t have quite the same feel of more ornate churches that have been converted, such as the former St. Mark’s Episcopal Church along Lincoln Street, which is now The Church nightclub.

The church, which is 3,048 square feet, sits to the rear of the corner lot. The site development plan calls for a 465-square-foot addition on the northern end of the structure.

The plan also calls for an approximately 4,500-square-foot, one-story building to be built on the western side of the lot on what is now a parking area.

The plan is to lease the church and new structure for retail and restaurant use. A portion of the church would be set aside as an artist studio.

Tamburello said he’s talked to multiple restaurants and a bakery about the space. No tenants have been finalized.

The project is an effort to change the feel of the area, Glick said.

In recent years, the commercial nodes that originally formed in residential areas along the city’s streetcar lines have been revitalized, Glick said. Chaffee Park, however, has never really had those clusters because it was being built as the streetcar system was dismantled.

The project, dubbed Zuni Plaza, is an effort to “re-create that old streetcar node” in what Glick characterized as “a reasonably priced neighborhood.”

“They’re just dying for something they can walk to, because right now, their retail options are Federal and Pecos, and there’s not much there on Pecos,” Glick said of residents.

The hope is to break ground in October or November, Glick said. Development likely would take about a year.

I support this project. I hope it becomes a reality