On one stretch of West 13th Street a block south of West Colfax Avenue, every street for 10 blocks has had at least one lot scraped and developed in the last three years.

That puts the West Colfax neighborhood, where rows of townhomes are replacing 100-year-old bungalows, near the top for scrapes competing with hot spots in Sunnyside and East Wash Park.

About 1,200 structures have been demolished and replaced with new ones since 2016, according to data provided by the City of Denver and analyzed by BusinessDen. The city’s data goes back only three years.(Click here to see our map with development organized by type of structures built … i.e. single-family homes, duplexes….)

Sloan’s Lake, Berkeley and East Wash Park had the most scrapes, according to the data. And scrapes in the last three years have pushed into previously untouched streets that developers bypassed for decades, such as Sheridan Boulevard and 38th Street.

But almost no part of town has had the block-by-block density of scrapes as West Colfax. 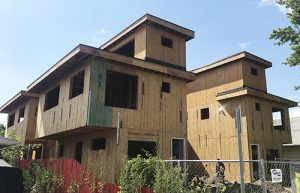 Mike McCarty, who started his development company Sustainable Design Build in 2015, has worked on five residential projects in the West Colfax neighborhood, specifically on Zenobia, Xavier and Perry Streets. The multifamily units account for 34 new townhomes in the area, each averaging 1,200 square feet and priced between $400,000 and $500,000.

“We came to the neighborhood ready to deliver below-average-priced townhomes,” he said.

“We think the reason the neighborhood has had such an explosion of growth is due to the light rail,” McCarty said, adding that the area also was re-zoned in 2010 to allow for multifamily units. “Instead of picking a different neighborhood and being spread out, we really believed in West Colfax. By continuing to build in this area we’re bringing more density.”

LoHi and Sunnyside scrapes primarily become two-family units. Broker Skyler Moore with Modus Real Estate said that while he works on multi-unit scrapes and builds in the West Colfax neighborhood, he has listed up to 30 duplex units in the last three years in the LoHi and Sunnyside neighborhoods.

“Mostly, it’s just because of the zoning,” he said. “West Colfax had more friendly zoning. … It’s all about density and putting as many units as zoning will allow.”

A LoHi duplex at the corner of 35th and Tejon. Photo by Kate Tracy.

“It is less money than a single family,” Moore said, adding that buyers also are looking for property that requires less yard work in that neighborhood as well.

Meanwhile on the east side of town, buyers value square footage over sticker price.

Larry Larsen, a home builder/developer with Larsen Development, has scraped and built 45 custom homes for clients in Wash Park in 10 years. 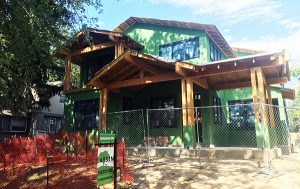 “I live in the neighborhood,” Larsen said. “It’s a very stable location. … Even when we go through a recession, the values stay.”

“It’s an attractive area to people. They like being right next to the park,” Larsen said. “They like the walkable aspects of it,” plus the proximity to Cherry Creek and the shops on South Gaylord Street.

And even the newer homes in Wash Park are getting some touch-up jobs.

“Those that were built 10 years ago, they’re doing major remodels and are improving them,” Larsen said. “We’re going back at houses that are 10 years old and just redoing the kitchens, the bathrooms, just opening up the plans more than they were 10 years ago.” 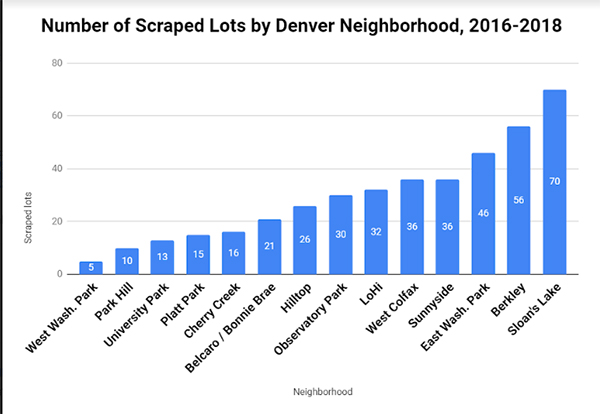 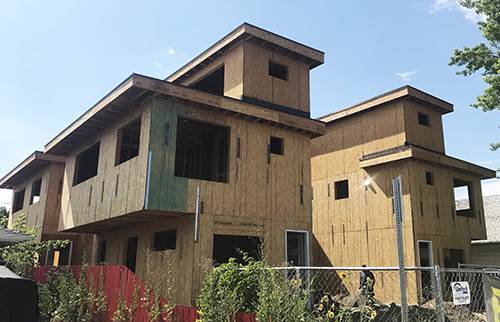 On one stretch of West 13th Street a block south of West Colfax Avenue, every street for 10 blocks has had at least one lot scraped and developed in the last three years.

That puts the West Colfax neighborhood, where rows of…

I live in West Colfax and I can tell you that it is criminal what Denver Community Planning and Development, along with our elected officials, hasve done to this neighborhood. No one here is against density per day, we knew that there would be density around light rail, but to see how this city is allowing developers to make hundreds of thousands of dollars building expensive townhomes with two car garages around our public asset, light rail, without demanding higher density and an affordability component to drive ridership and liveability in our city is going to cause more harm than… Read more »

In Berkeley, 90% of the activity is on 4 streets (Raleigh, Stuart, Utica, Vrain) which were zoned for duplexes in 2010 while the rest of Berkeley was downzoned from R2 to R1 (effectively).
As someone who lives in a newer duplex on Vrain, I see this as a “good thing” as the higher density is around Tennyson and its growing retail.
I like what Perter Park did.

It’s interesting that the neighborhood graph does not include Congress Park. As much as we love the “historic” nature of our neighborhood, it’s the architectural details and uniqueness of each home that enhances our neighborhoods. I think it would be hard for people to say that Wash Park with all its scrapes has suffered from it’s development; albeit it has the unique draw of the park itself. Zoning IS key and single family lots should be kept as such. I’d love to see a comment requirement from close neighbors for all scrapes to ensure some sense of architectural consistency. Thanks… Read more »

Thank you for research. I think University Park and Observatory Park are the same-how did you differentiate? Is Crestmoor included in Hilltop?

Crestmor IS included in Hilltop.

These developers are creating affordable homes in great areas! People may not like the new developments, but think about how many homes will be available for people in need. Great neighborhoods as well! Colorado will continue to change and grow, and creating more housing is helping so many people!

Affordable? On what planet?

Join the discussion. In order to foster transparent, civil conversation, please include your full name when posting comments.