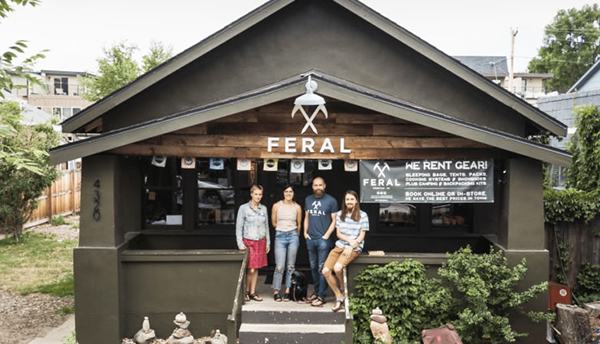 Feral, an outdoor store in Denver, is expanding into a bigger building on Tennyson Street.

Feral signed a lease at 3936 Tennyson St. for 4,800 square feet in the Flesher Hinton building. The space is nearly five times bigger than its current shop four blocks away.

“This building is the crown jewel of the neighborhood,” said Feral owner Jimmy Funkhouser. “We need more space to handle our growing rental business and retail business. It’s the first building that has always come to mind.”

Funkhouser said Feral’s current shop at 4320 Tennyson St. is getting scraped. Funkhouser had been eyeing the Flesher Hinton building for more than a year, and even tried to strike a deal with the owners to lease space there. After telling his current landlord, John Horvat with Archer Development about the building, Horvat purchased it on April 27 for $1.6 million, according to Denver property records.

“(He) essentially bought this building so that we can move into it,” Funkhouser said. “He is solely responsible for the fact that we can stay in this neighborhood.”

Feral signed a 10-year lease on the new store and plans to open in 2019. Funkhouser said he is exploring private financing options to fund the new location. He declined to disclose Feral’s financial details.

“I think from the outside looking in, we started so much smaller than nearly any outdoor gear shop,” Funkhouser said. “No one in their right mind would consider opening a 700-square-foot outdoor shop…the rare thing was that we were so damn small to begin with.”

Feral’s announcement of its Tennyson expansion comes on the heels of the opening of its second store in Idaho Springs.

“When you look at the timing, it certainly wasn’t planned,” Funkhouser said. “Trying to open two stores in one year is a significant undertaking for any business, regardless of your size and scale.”

The extra space will allow Feral to host events and design larger outdoor displays, including tents.

“One of the challenges for most outdoor shops is selling tents,” Funkhouser said. “If you can’t see it, why not just buy it online? We’re going to take the approach of displaying more tents and stuff that customers want to see.”

Feral, an outdoor store in Denver, is expanding into a bigger building on Tennyson Street.