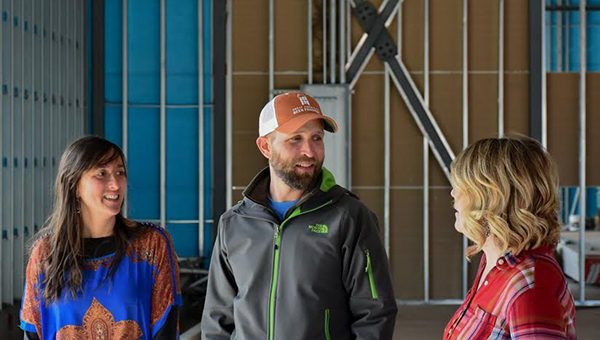 A new brewery is coming to Golden, five minutes yonder from the Red Rocks Amphitheatre by car.

“Red Rocks gets over a million visitors every year,” said Ashleigh Bilodeaux, who is launching Over Yonder Brewing Co. inside the Gateway Retail Center next year with her brother, Jason, and his wife, Jessica.

“Even getting a fraction of that would be huge.”

The three have been working for three years to launch the company. There’s also family history: Ashleigh and Jason’s father has worked for Coors Brewing Co. for 35 years.

“We grew up with that, and we’ve always been avid fans of beer,” Ashleigh said. “Now we want to be passionate creators of it, to do something about it.”

Over Yonder will be located in a 4,000-square-foot space off the I-70 mountain corridor inside the Gateway Retail Center, home to the Origins Hotel and a Harley-Davidson dealership. Forrest Bassett, a broker with VanWest, helped put together the lease.

With nearly a dozen breweries already inside Golden, Over Yonder plans to distinguish itself from the competition with an emphasis on music, both live shows and recorded classics streamed in.

All three founders have kept their day jobs. Ashleigh is a marketing professional living in San Francisco, where she co-founded Brew TV in 2015.

Jason, Over Yonder’s brewmaster, does graphic design for Ball, where he helps create the art for the craft beer the company distributes. Jessica is a corporate tax auditor, and she’ll be in charge of Over Yonder’s finances.

According to Ashleigh, the brewing company plans to have four to six core beers on tap at a given tap in addition to a handful of seasonal lineups. On its website, Over Yonder lists New England IPAs, witbier, a coconut porter and more among some of the drafts that locals and visitors can expect to see.

The company plans to distribute to nearby restaurants before thinking about cans or locations outside of Golden.

“With nearly two dozen breweries already inside Golden” – I’ve been in Golden for a long time and I only know of 5 breweries – 6 if you include Coors. Where are the other 18-19?

Due to an editing error, the “two dozen” figure was left in a story.