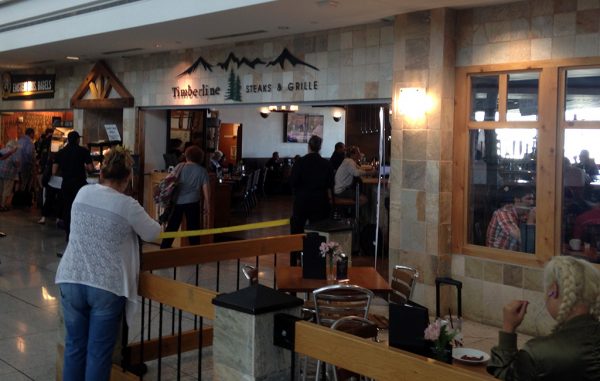 Business has been good at Timberline Steaks & Grille on Concourse C of Denver International Airport—and for good reason. Customers are walking out with bellyfuls of prime meat, beer and wine after paying below-menu prices – if they have the right credit card.

Last September, Timberline partnered with travel rewards company Priority Pass to give certain credit cardholders a $28 meal credit to use multiple times – the first DIA restaurant to do so. Nine months later, Timberline said the program is to thank for a significant boost in traffic: In May, rewards members accounted for over $400,000 in sales.

However, the impact on the restaurant’s bottom line is less certain.

“It’s a brilliant program,” said Zan Steinberg, Timberline’s general manager. “But, for a full-service restaurant, I don’t know if the dynamics are correct.”

Priority Pass traditionally has given members access to airport lounges through cards such as Chase Sapphire Reserve or American Express Platinum. Last August, the company announced it would expand its member benefits to include restaurant credits at certain airports in the U.S. and abroad, signaling a shift away from lounges that were becoming more crowded.

Steinberg said the restaurant recorded about 6,000 Priority Pass check-ins during the program’s first 30 days last year. That number had tripled since then, with nearly 18,000 check-ins for May, or 38 percent of Timberline’s total business.

But the increase in sales doesn’t necessarily mean increased profit. The rewards program reimburses Timberline just $23 of the $28 credit; the remainder goes back to Priority Pass and its parent company, The Collinson Group.

“So from the front end, it’s bringing in a lot of traffic,” Steinberg said. “But if you’re sending out $5 per person back to that company, is it truly profitable?”

Then there’s the matter of service. Priority Pass diners may expect a cheap or even free meal, but the restaurant credit can’t be used towards the gratuity. That doesn’t always bode well for the wait staff.

When the program started, Steinberg estimated only 25 percent of Priority Pass members tipped their servers appropriately. But the restaurant raised that number to at least 75 percent today through coaching and printed notices.

Timberline signed a year-long contract with Priority Pass, and Steinberg said the restaurant won’t know  if it benefited from the deal until the end of summer. He didn’t rule out asking for a larger reimbursement for the 2018-19 year.

“It’s definitely a traffic driver, definitely unique, but it definitely has its downsides,” he said. “Is it profitable? We’re still learning.”

What will be of interest is Priority Pass is offered to Amex Platinum and Centurion car holders. I believe Amex may be opening a Centurion Lounge at DIA next year. Thus will be interesting to see the % of Amex card holders who may be using Priority Pass in Denver who will migrate to Centurion. While I hav a Priority Pass and fly our of DEN multiple times per month I have yet to use at Timberline as I fly from Concourse B and my time is limited. And while cost per visitor may impact the bottom line like any marketing program I believe most likely bringing patrons who would otherwise bypass the restaurant altogether.

1) Priority Pass is a membership service that primarily caters to individuals who pay their annual membership fee. AMEX Platinum and Centurion Card holders had access through a partnership between AMEX and Priority Pass (for one of their three offerings – Priority Pass Select), but the massive growth has come with the Chase Sapphire Reserve (this is not a “tradition” – it is a relatively new dynamic);
2) There are no other Priority Pass-accepting lounges at DIA, so one would not expect a correlative surge in usage, at least not tied to Priority Pass;
3) You should check Steinberg’s information, as the receipts given to customers suggest $24, rather than $23, goes to Timberline, bringing it almost in line with industry discounts (i.e. servers from other eateries);
4) Priority Pass presumably gives AMEX and Chase discounts on the memberships, but even at full price a Priority Pass Select member ($399/year) would only have to eat at Timberline 13 times in a calendar year (at the $24 reimbursement rate), not using any other lounge access anywhere, to meet their full price. In other words, Priority Pass is more likely to back out of this deal, or to introduce usage restrictions, than Timberline.