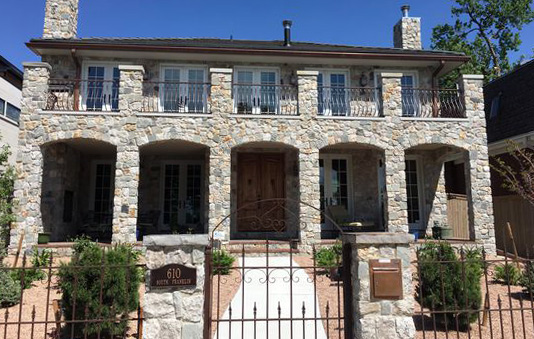 If a Wash Park home fetches close to its asking price, it will set a new high water mark for the most expensive sale in the neighborhood.

Begley said she’s going to try to sell it herself without an agent.

“We just thought we’d give it a try,” she said. “If it sells it sells, if it doesn’t we can always get an agent.”

The most expensive recent home sale along Washington Park sold for $3.3 million in 2016 to a former Alibaba executive. And last year, the lead guitarist for band The Fray listed his Wash Park home for $4.05 million.

Robert Hirsch has owned the property along Franklin Street on the east side of the park since 1986, when he bought it for $135,000, according to property records. He and Begley moved into the newly constructed, French-style stone home in 2017.

“We tried to make it in the character of Smith Lake and the boathouse, and also taking advantage of the views,” Begley said. The second-story runs the length of the home.

Begley’s favorite room is the kitchen.

“It has a wood-burning fireplace in it and a lot of stone detail,” she said.

Seller: Belinda Begley and Robert Hirsch, who are both lawyers. Hegley worked for the 10th Circuit Appeals Court.

The finer things: The stone French-style home has five fireplaces, copper gutters, an elevator and two patios, and overlooks Smith Lake and the boathouse.

If the French-style property fetches close to its asking price, it will set a new high water mark for the most expensive sale in the neighborhood.

The former home of the Fray guitarist actually sold last year for $3,650,000.

The home owned by The Fray member sold for $3.75 million in January. The home faces the park but with no view.

That why it was written “listed” not “sold”