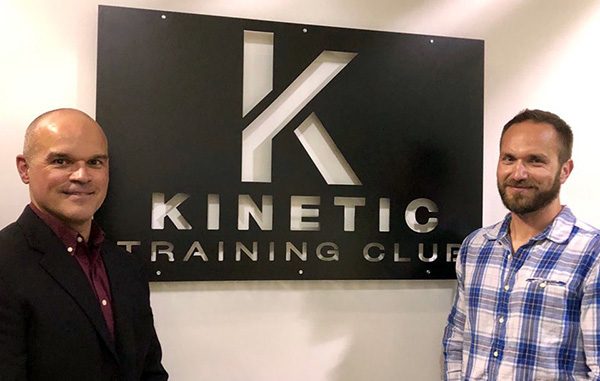 Nate Fryer is muscling his way into gym ownership, and eschewing the group training craze.

Fryer opened the Kinetic Training Club last week in a 3,100-square-foot facility at 1610 Little Raven St., Suite 135. He and two other personal trainers will coach clients one-on-one in the space.

“It’s pretty easy to get to from downtown … there is two-hour street parking, and I do have clients that drive in,” Fryer said.

He said he also chose the location for its proximity to downtown. The gym currently has about 20 clients who attend one-hour sessions.

“The groups that we’re looking for, they’re typically business executives that are going to be coming in,” Fryer said. “They may not have time on their schedule to go to a gym on their own and figure out what to do.”

He said Kinetic is full of original equipment, including two machines he invented and patented in 2011. One is similar to a lat pull-down and the other is similar to a chest press, but both machines apply a secondary force of resistance to work more muscles.

“If you just do these two machines, your upper body will be set,” Fryer said.

In addition, Kinetic has added a traversing wall with TRX suspension equipment, as well as the Zero Runner, a machine that’s similar to an elliptical.

Fryer, 38, studied exercise science at Iowa State University and worked at hospitals, rehab facilities and sports clinics. He moved to Denver in 2002.

“During that time I was always doing personal training,” he said. “I really found my passion was dealing with people that had injuries.”

Fryer decided to open a gym because he saw a need for personal trainers to have a permanent place to meet clients.

“What we found is that when people meet with us once a week, it allows us to make adjustments to their workouts,” he said, adding that Kinetic can coach customers on nutrition, sleep and other habits.

Other recently opened personal training gyms in the metro area include Summit Fitness, a 4,000-square-foot facility near the University of Denver that launched last year.

Nate Fryer is muscling his way into gym ownership, and eschewing the group training craze.