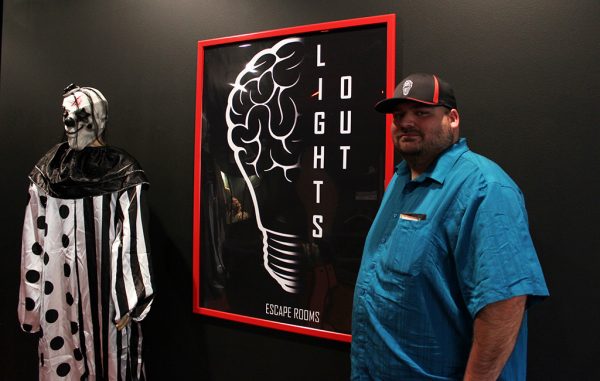 A couple’s love for Halloween has prompted them to add a touch of horror to the escape room trend.

Justin Goodchild and his wife Pamela will open Lights Out at 1500 W. Littleton Blvd. this Friday. It has three escape rooms, each with a different theme: a zombie nursery, a clown circus, and a set of rooms where participants compete against each other.

A fourth room, with an asylum theme, will open later for two-person teams, Goodchild said.

Despite the themes, Goodchild said the escape rooms aren’t meant to be a haunted house. The goal is not to scare people.

“It’s more the thematics of horror,” he said. “The horror element adds more of a suspense to it when you’re sitting there watching the clock tick down. I’d say my biggest challenge with this place was I didn’t want anything to come across as gimmicky or corny, and that’s hard to do with horror.”

Goodchild said that last year, while generously decorating the couple’s home for Halloween, he thought it would be fun to make an escape room in his garage.

The idea grew into a business plan, and during October, Goodchild found himself searching for a space. 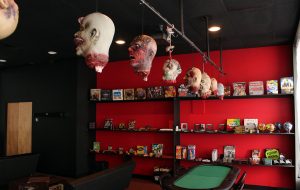 Lights Out has a bar and lounge for board games in addition to escape rooms. (Kailyn Lamb)

He settled on 3,300 square feet that previously housed a massage studio and karate gym. Goodchild said the couple signed a five-year lease and spent about $60,000 in startup costs, half of which was funded with an SBA loan. The couple raided their personal Halloween decorations to help outfit the space.

Getting out of the escape rooms requires solving various puzzles. Successful solves can result in the lights going on or off — hence the business’ name.

“It never feels stagnant. It’s a lot more than just going in and solving something to unlock a lock,” Goodchild said. “The basic design of an escape room, in my feelings, is everything should flow.”

In addition to the escape room, Lights Out has a bar and lounge to play board games and socialize. A large screen will play a horror movie montage, and monthly movie nights are planned.

“A lot of the escape rooms don’t offer the social aspect,” Goodchild said.

Goodchild works in video security, and said those skills helped with technical aspects of setting up Lights Out. He plans to keep his day job; Pamela will manage the escape room.

A couple’s love for Halloween has prompted them to add a touch of terror to the escape room trend.

Looks like a unique addition to the scene, can’t wait to check it out. You should include a link to their website in the article too.

It has been their favorite activity as they have been trying to go to as many escape rooms as possible. This is the reason I have also been joining them in some of the escape rooms.