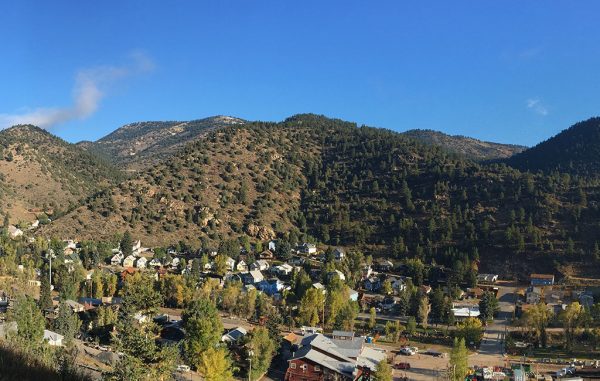 Idaho Springs received a $62,000 grant for trails near the town. (Courtesy Alan Tiefenbach)

The rush to turn former mining towns into outdoor recreation hubs has come to Idaho Springs.

The City of Idaho Springs has received a $62,000 from Great Outdoors Colorado, the Denver-based organization that’s given out more than $1 billion in lottery proceeds to outdoor projects around the state.

Alan Tiefenbach, community development planner for Idaho Springs, said the funding will go toward planning 13 miles of trails for hiking and mountain biking on the northern hillside directly above the town, the Virginia Canyon Open Space.

“It’s a huge opportunity for us,” Tiefenbach said. “We hope to have some of the trails formalized by summer 2019.”

The project goes back to 2003, Tiefenbach said, when Clear Creek County deeded the 400-plus acres that make up the Virginia Canyon Open Space to the city. In 2006, the city created a plan for the land, he said.

“It basically fell between the cracks for the next 11 years,” he said, adding that the city revisited the idea 18 months ago during rezoning efforts for the Argo Mine & Mill.

“One of the things we don’t have in the town are hiking or biking opportunities in the city,” Tiefenbach said. “Because of the proximity to the Front Range being right on I-70, we think this is going to be a game changer.”

He said mountain bikers have been using unofficial trails on the Virginia Canyon Open Space property, otherwise known as Area 28.

“At the time it was sort of a secret,” he said. “Many of those trails were not built to standards … this is a move from the city to try to formalize this and make safely made trails.” 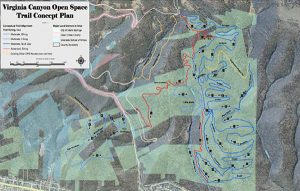 The City of Idaho Springs and Colorado Mountain Bike Association are in the process of selecting a trail designer. Some of the trails will be hiker- and biker-only, said COMBA’s David Knox, trails leader for Clear Creek County.

“While we believe that there needs to be more mountain biking access on the Front Range in order to reduce user conflict, the city of Idaho Springs asked for a more multi-use project,” Knox said. “We are quite happy to have some of the trails to be biker-only.”

Virginia Canyon Open Space is one of many efforts to make Idaho Springs a destination for outdoor enthusiasts and tourists. Denver-based outdoors retailer Feral Mountain Co. picked the city for its second location. It also is considering turning the commercially rezoned Argo Gold Mine & Mill into a hotel or convention center.

“The Front Range is just so crowded with people recreating at this point,” Knox said. “This is an opportunity to disperse that traffic.”

Virginia County Open Space received a portion of the $633,250 GOCO gave in planning grants to outdoor-related projects statewide, including $75,000 to Jefferson County for planning paved or soft-surface paths. GOCO also announced it awarded $4.9 million this month to other parks and recreation projects, including a $260,000 grant to the City of Loveland for a 1.5-mile trail project.

Idaho Springs received a $62,000 grant for trails near the town. (Courtesy Alan Tiefenbach)

The funding will go toward planning 13 miles of trails for hiking and mountain biking on the northern hillside directly above the town.