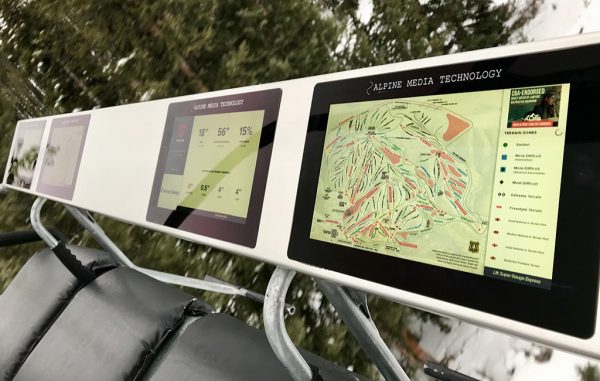 Co-founder Freddie Peyerl said the business – which this year ran a pilot program installing five screens on chairs at Winter Park – raised a $1 million seed round.

He said Alpine Media will use the funding for hardware, software development, intellectual property and legal costs.

The startup tested the concept on five of the chairs on the Super Gauge lift at Winter Park’s Mary Jane.

“It’ll be on all 104 of the chairs on the Super Gauge. We’ll have the entire chair lift outfitted as well as the new gondola.”

The company also puts larger screens in public areas at resorts. At Winter Park, it installed 55-inch indoor displays at seven locations in lodges and 50-inch outdoor displays at the base of the mountain.

And the advertising came with strict rules. The U.S. Forest Service told Alpine Media they could use about one-third of digital displays for ads, but Alpine Media said its advertising space was well under that, at only 5 percent.

“We didn’t get a lot of pushback from people who experienced this on the chairlift,” Peyerl said. “We want to put the information systems out there for riders to make the most of their day.”

He said his co-founders are hoping to go full-time with Alpine Media soon.

“Not only did we close out our seed round, but we’ve opened up a much larger raise,” said VandeKemp. “That’s the final ingredient and the recipe for us to make this our full-time gig.”

Alpine Media’s $1 million funding round came from angel investors and friends and family.

The startup has developed a charging panel for the screens to charge as chair lifts pass around the bull wheel, but for Alpine Media’s trial run this year at Winter Park, the screens used batteries.

“We are focusing on ski resorts or areas where there are gondolas, because the only way to deliver enough power to do digital displays on chairlifts and gondolas would be by utilizing our method that we have our patent (pending),” VandeKemp said. 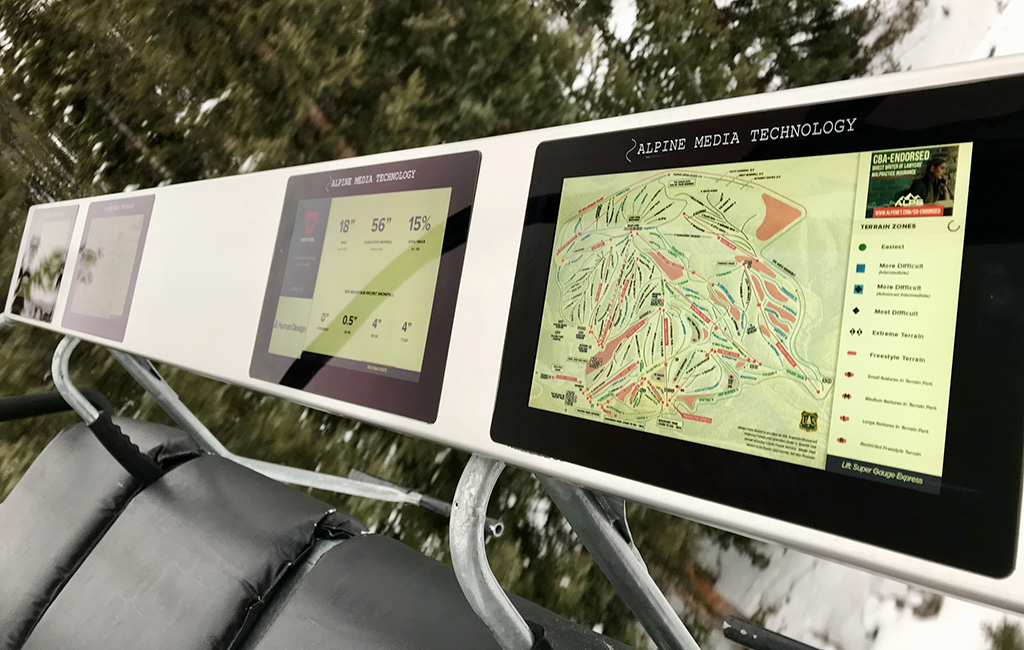 It already has tested the concept with five chairs on the Super Gauge lift at Winter Park’s Mary Jane.

How do they plan to deal with the inevitable stickers being put right over their screens?

Batteries in sustained freezing temps must be their chief challenge

Screen time used to bother me (father of 4 kids) but then I embraced it realized how it could be use for good. …I love my All Trails, 14ers.com, Hiking Project, Tribe Pilot, Sky view apps …they teach my kids about the great outdoors. The kids freak out (in a good way) when I say “okay kids, what does your phone say?” or “is this plant poisonous, someone look it up” or “can someone name that constellation?” …suddenly they love the outdoors. Use the technology for good…b/c we enhanced it with technology…a world they grew up with.
I can see how understanding what type weather is rolling in, or what lifts and runs are open as a good thing and lift enhancement. …this is a silent display. I think it’s a pretty cool idea.
Amanda mentioned she goes to the mountains to “get away”
I would venture to say that a Ski resort is not really getting away. …try hiking a couple of 14ers. Iv’e had plenty of deep conversations on those trails.