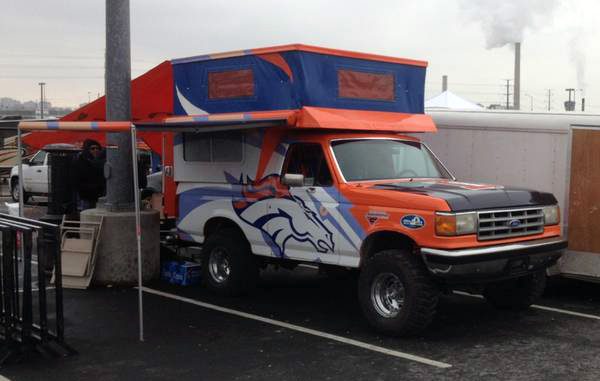 Cari and Rob Rowe almost snuck into the Denver Broncos Super Bowl parade the last time they took their 1987 Ford Bronco for a spin.

That’s because their Bronco Bronco is decked out in a custom paint job with a pop-up camper celebrating their favorite football franchise.

“Everybody thought we were the start of the parade,” Cari Rowe said.

Now, the owners of Phoenix Pop Up Camper in Commerce City are retiring the truck they built in 2013, listing it on Craigslist for $29,000.

“We don’t get out anymore to the games,” Rowe said. “It just sits around at our shop … We’d like somebody who can take it to the stadium and can enjoy it.”

The Rowes received permission from the Broncos to use the graphics in 2013, when they wanted a custom tailgate vehicle. The couple would roll up to the stadium and pull down a 40-inch TV to watch games in the parking lot. The camper also has a sink, stove, shower, bench seat and pullout twin bed.

Last year, Phoenix Pop Up Camper finished 15 custom jobs building out campers on trucks and other vehicles. Each project takes up to six weeks, and Rowe said she and her husband are working too much on weekends to make it to games anymore.

“The Bronco Bronco is just one of those things that shows what we can do,” she said.

Brand new, they would sell the Bronco Bronco for around $60,000, but after five years of use, it needs some maintenance.

“It will probably need an engine repair,” Rowe said. “It tends to overheat if you drive too long.”

The owners of Phoenix Pop Up Camper in Commerce City are retiring the "Bronco Bronco" truck they built in 2013.