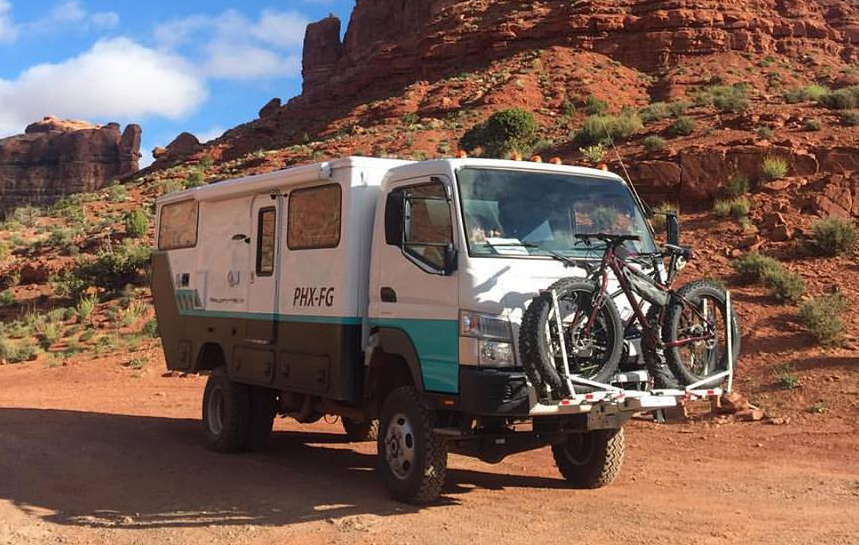 The custom Phoenix Pop Up Camper, nicknamed Sally Ross, is on sale for $99,000. (Courtesy Donald and Sarah Butcher)

Narrow European roads are no place for a 22-foot-long and 8-foot-tall camper truck customized to ford small streams and leave rival RVs in the dust.

So as Sarah and Donald Butcher weigh a potential move to Europe this summer, the Denver couple is putting their custom Phoenix Pop Up Camper – nicknamed Sally Ross – up for grabs for $99,000.

“It’s sad to have to sell it,” said Sarah Butcher. “It’s way too big for Europe.”

Sally Ross is a one-of-a-kind Mitsubishi Fuso truck built by Phoenix Pop Up Camper, a Commerce City-based company that has been making and selling custom truck campers since 1987.

Rob Rowe, owner of Phoenix Pop Up Camper, remembers Sally Ross well. He bought the 2014 Fuso truck in Tennessee, then waited six months as five people built the aluminum frame structure of the camper, the electric roof lift system, and outfitted the vehicle with all its camping necessities. The camper is equipped with a queen-size bed and a full-size bed, shower, toilet and solar panels. 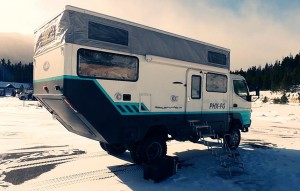 The camper is equipped with a queen-size bed and a full-size bed, shower, toilet and solar panels. (Courtesy Donald and Sarah Butcher)

“Close to half of the cost of that thing is the truck and material expenses, but the labor was massive,” Rowe said.

The Fuso is equipped with a four-cylinder diesel engine and four-wheel drive. The vehicle’s high ground clearance, height and width enable it to easily drive off road anywhere, regardless of road or trail quality.

“It fits a lot of places that even small RVs won’t fit,” Rowe said.

Rowe has a soft spot in his heart for the rig: He drove it to camper and RV trade shows, watching heads turn along the route.

“Everywhere we go, people would just be pointing, asking questions and flagging us down on the highway,” he said.

The Butchers said they bought the Sally Ross for about $100,000 in January last year because they needed a bigger vehicle for their growing family. They have taken it on long road trips and frequent weekend trips through Colorado, Texas, Idaho and other Western states, and were pleased with how easily it could manage rutted trails and water crossings.

“We loved the vehicle. It’s extremely versatile,” Butcher said. “We barely ever put it in four-wheel drive because it doesn’t need it.”

The custom Phoenix Pop Up Camper, nicknamed Sally Ross, is on sale for $99,000. (Courtesy Donald and Sarah Butcher)

Sally Ross is a one-of-a-kind Mitsubishi Fuso truck built by Phoenix Pop Up Camper, a Commerce City-based company founded in 1987.

Can we have pictures of the inside please

heres link to a video that may show some inside:
http://forum.expeditionportal.com/threads/168002-2014-FUSO-FG-4×4-Phoenix-Camper-(Sally-Ross)

Here is the craigslist ad. There are interior images there.

I’m very interested in your camper! Can you please send me pictures of inside the unit?
Thank you, Cory