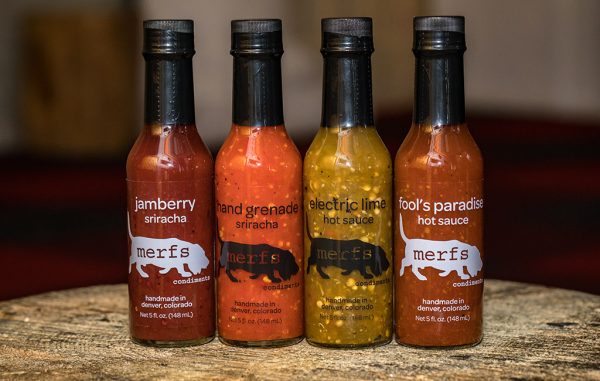 The coffee roasters at a 1,500-square-foot industrial Lincoln Park building soon will be replaced by kettles filled with hot sauce and mustard.

Denver-based Merfs Condiments is taking over a Pablo’s Coffee location at 728 Lipan St.

Merfs owner Kelly Schexnaildre said it will move into the building in April, and that she’ll be bringing a friend: Maura Gramzinski of Deliciousness jams.

“Right now since we only have one 100-gallon kettle in the space I’m in, I do 100 gallons and then I have to wash it and then do another 100 gallons,” she said. “It’ll be nice to flip the switch and have two of them be on so we can just have continuous bottling through the day.”

Schexnaildre said she wanted to bring Deliciousness into the space to collaborate on new projects.

“There’s a lot we couldn’t do alone that we can do together.”

She said she’ll invest $40,000 in equipment and renovations. Deliciousness is subleasing a portion of the space from Merfs for jams. Merfs is working with Hindlemann Architecture to design the space and Dlin Construction Services for renovations.

The condiment company sells to about 150 clients, mostly restaurants, Schexnaildre said. On May 1, it will appear on the shelves of King Soopers.

Schexnaildre moved to Denver from Louisiana in May 2010. She launched the business in January 2014 making a peach habanero hot sauce.

Gramzinski launched her company Red Camper in 2004 making handbags out of old photo slides. She began making a whiskey peach jam which won a first place prize at the Denver County Fair. In 2012, Gramzinski expanded her business to include Deliciousness. She made 500 jars of the whiskey peach jam, which sold out in four weeks. Now, 75 to 80 percent of Red Camper’s sales come from the jams.

“It’s is a huge step up for me. I’m still cooking on smaller pots,” Gramzinski said. “The space will allow me to make more at once.”

Gramzinski said she makes her product out of a commissary kitchen. While some of her jams can be made year round, others like the whiskey peach change with the season. She said it focuses on cheese and specialty grocery stores, and has about 100 different distribution accounts.

Gramzinski said most of its products also have alcohol flavors, and that she works with Colorado distillers.

Pablo’s Coffee will move its roasting operation to East Colfax.

The landlord and tenant have talked about working together in another capacity. Schexnaildre is also working with Pablo’s to release a coffee-inspired hot sauce.

The roasters at a 1,500-square-foot industrial building soon will be replaced by kettles filled with hot sauce and mustard.