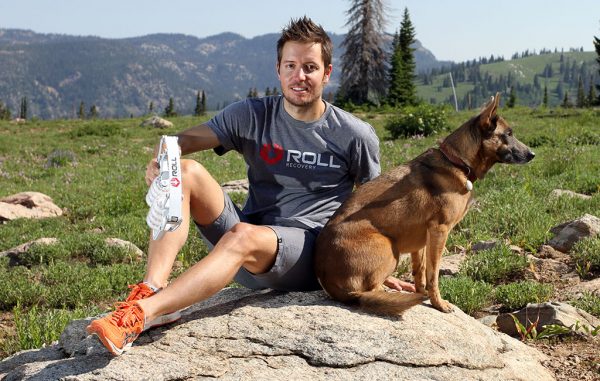 Jeremy Nelson with the newest version of the R8 roller. (Roll Recovery)

Tuning into the Olympics two weeks ago, Jeremy Nelson was caught off guard.

On his TV screen, U.S. Olympic ice skater Karen Chen was using Nelson’s product — which he designed for runners — to warm up.

“It was one of the coolest things seeing the R8 (on TV),” Nelson said. “I had no clue that an elite figure skater would be drawn to the R8.”

Nelson is the founder of Boulder-based Roll Recovery, which in February released the newest iteration of the R8, a massage roller that has become Roll Recovery’s marquee product.

Nelson started working on the R8 while helping his marathoner wife train for the 2012 Olympic trials. While she was getting massages once a week, Nelson wasn’t, and he wanted a tool that would help his muscles recover.

“All I was finding were really basic foam rollers,” Nelson said, as well as muscle roller sticks made out of plastic. “I thought, ‘You know what? I should see what I can come up with here.’ I didn’t see much innovation at all.”

What followed, he said, were many hours in his garage, fiddling with designs until he came up with the R8. Athletes hold with two hands as four wheels on each side adjust to massage quads, IT bands, hamstrings and other muscles. 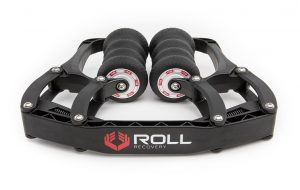 Four wheels on each side adjust and massage muscles. (Roll Recovery)

While athletes have long used similar products to warm up or recover, Nelson said, the R8’s spring-loaded design delivers the right amount of pressure.

“It applies the force by itself,” he said. “It really does require a lot of force to be effective.”

The latest version of the product is customizable, with attachments that allow for lighter or deeper levels of massage.

The product is sold online and at 500 retailers, the bulk of which are specialty running stores. Roll Recovery manufactures its main components in China.

In December, the company moved its headquarters into 6,500 square feet at 5400 Spine Road. It employs nine people at its new Boulder digs, which is more than twice the size of its previous location.

In addition to the R8, Roll Recovery’s most popular product, it sells a foot rollers and a diamond-shaped mat for stretching.

Jeremy Nelson with the newest version of the R8 roller. (Roll Recovery)

Roll Recovery has released the newest iteration of a massage roller that has become its marquee offering.

That is so awesome! I’ve seen these guys since they launched the Original R8 and we are so proud to support them. Not only amazing company, but also great people to work with. Keep up the hard work! We truly love your products and we are extremely satisfied with the recovery time. We’ve been staying so much healthier since using the R8 and we already got the new version, which by the way blows doors! What an incredible product. Thank you million times! Tina