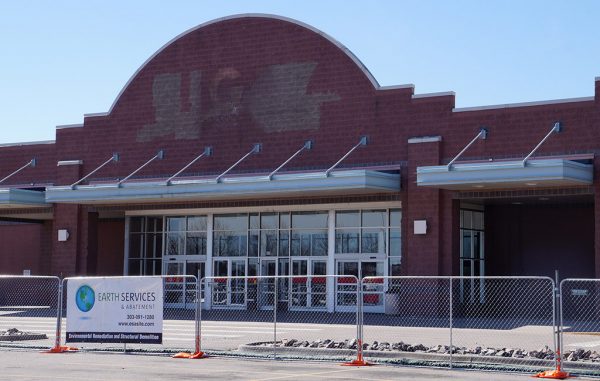 The former Kmart at 363 S. Broadway is slated to be torn down to make way for an apartment complex. (Thomas Gounley)

The former Kmart in a retail complex at Broadway and Alameda is now surrounded by construction fencing.

The store, which closed last spring and left Kmart without a Denver presence, is slated to be torn down to make way for an apartment complex.

Price Development Group wants to build a 341-unit apartment complex on the southeast corner of Alameda Avenue and Cherokee Street, according to plans on file with the city.

The plans, not yet approved, call for the complex to be five stories along Alameda, rising to seven stories to the south of the lot. It would incorporate a parking garage with 461 spaces.

Price Development Group has an office at 1720 S. Bellaire St. in Denver, as well as in Kansas City and Dallas. It is building a 255-unit apartment complex in Parker, according to its website. An executive did not respond to a request for comment.

The property where Price plans to build is owned by Denver-based D4 Urban, master developer of the retail complex, known as Denver Design District.

The former Kmart at 363 S. Broadway is slated to be torn down to make way for an apartment complex. (Thomas Gounley)

The store, which closed last spring and left the retailer without a local presence, is slated to be torn down to make way for an apartment complex.

will there be affordable housing with this?

This seems like a wasted opportunity to create a dense, walkable transit oriented development with narrow streets, retail, etc. that could greatly compliment the surrounding neighborhood. Instead we get another block-sized building that won’t do anything to promote the “car-free” lifestyle it suggests.