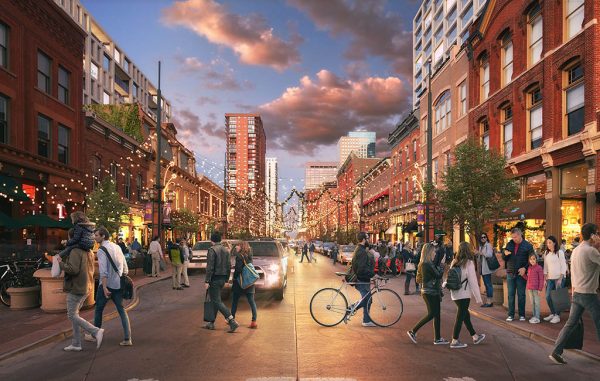 Larimer Square could be getting an upgrade.

Block owner Jeff Hermanson and partner Urban Villages announced plans this week to build two structures on the block, a move they said would increase density and keep the area “vibrant, relevant and activated,” while also attracting capital needed to renovate the street’s century-old buildings.

“It’s very hard to find the capital to just maintain the buildings that are there,” Urban Villages Chief Development Officer Jon Buerge said. “By building new density, it becomes the impetus for investing money in the historic buildings.”

One new building is proposed for each side of the street. Neither would have street frontage – they would be built behind existing structures, butting up against the back alley.

The plans are in early stages, with building height undetermined. In addition to typical site plan approval by the city, the project also needs City Council to amend the area’s current 64-foot height restriction.

Buerge said the proposed building closer to Market Street, likely eight to 12 stories, would have 300 apartment units, about 90 of which would be reserved for individuals making between 30 and 80 percent of the area median income. There would be some retail on the lower level.

The proposed building on the opposite side, closer to Lawrence Street, would be taller, Buerge said. It would incorporate retail, a hotel and an upper level with bars and restaurants, as well as condo units on upper floors.

The base of the building, which visitors would access by walking through the Kettle Arcade, would be a five-story glass atrium.

Plans call for gardens and event space on roofs along the street.

“There’s a true opportunity to reinvent the block,” Hermanson said.

Larimer Square is the oldest commercial block in Denver. Demolition of the area was floated in the 1960s, but the effort was halted when Dana Crawford found investors and purchased the block, spurring retail revitalization. Hermanson, CEO of Larimer Associates, purchased the properties from Crawford in 1993.

The street is home to numerous small retailers and restaurants.

The plans unveiled this week also include a third new building, not on Larimer Square. Hermanson owns the parking garage at 1422 Market St., and he and Urban Villages hope to replace it with a mixed-use building. It would be across the alley from the affordable housing building, and Buerge said he envisions small retail spaces facing the alley.

The companies hope City Council will consider amending the height restriction this summer. If that happens, work could begin in late 2019 or 2020, Buerge said.

Development partners say they hope to increase density and keep the area “vibrant, relevant and activated,” while also attracting capital to renovate the street’s century-old buildings.