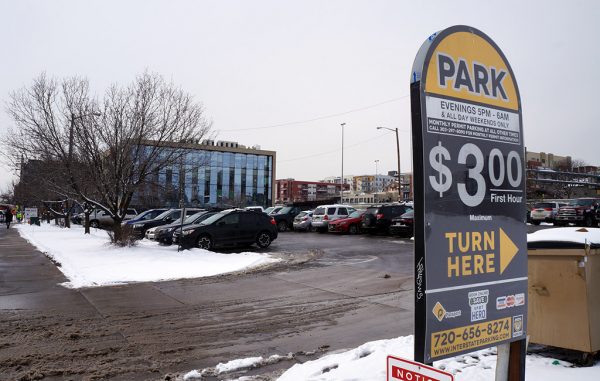 Developers proposed a five-story building at the corner of Platte and 17th streets. (Thomas Gounley)

The Denver-based company, which developed a four-story building at 1644 Platte St., filed plans with the city proposing a five-story structure half a block away.

The plans, drawn up by Beck Architecture, call for retail and restaurant space on the ground floor, with the upper floors devoted to offices. The building would total 246,000 square feet.

The development is proposed for the northwest corner of Platte and 17th streets, next to Denver Beer Co. and WeWork’s LoHi location.

The 1.45-acre site is a parking lot owned by the City of Denver. Courtney Law, spokeswoman for the city’s finance department, said in an email that “the city has gone through an RFP process on this property and has negotiated a deal for City Council approval,” which will go before the body in the coming weeks.

The plans, which still need city approval, estimate a project cost of $20 million and a 2020 completion date.

Nichols is familiar with the neighborhood. The firm’s office is located in the building it erected at 1644 Platte, which is partially leased by coworking firm Galvanize.

Next door, Trammell Crow Co. is wrapping up work on its Riverview office building. Petroleum giant BP and software company Workiva are among those signed on for space. Down the street, a former grocery store has been demolished to make way for Fort Worth-based Crescent Real Estate’s Platte 15 project.

Nichols’ past Denver projects include the Spire condo tower at 891 14th St. and the conversion of the former Hotel VQ into Turntable Studios.

Developers proposed a five-story building at the corner of Platte and 17th streets. (Thomas Gounley)

The Denver-based company that developed a four-story building on Platte Street filed plans with the city proposing a similar structure half a block away.