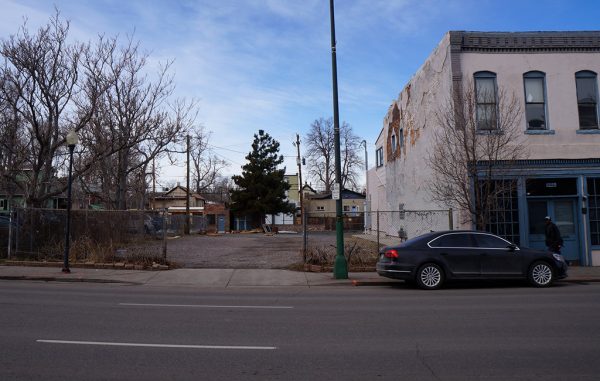 A developer wants to build an eight-story residential building on the 1200 block of Santa Fe Drive. (Thomas Gounley)

A developer wants to build an eight-story multifamily building in Lincoln Park.

The plans call for 58 parking spaces.

The company is owned by Leon Cisneros, who did not respond to a request for comment. Cisneros developed the Sloan’s Lake Flats apartment building at 4601 W. Colfax Ave.

The smallest units would be 425 square feet, according to the plans, which still need to be approved by the city.

The three parcels add up to 0.45 acres. Steele Street LLC paid $2.1 million for 1223 and 1225 Santa Fe Drive in June 2017, according to property records. The third parcel is owned by Santa Fe Drive Partners LLC.

The new structure would require the demolition of a two-story building at 1225 Santa Fe, according to the plans. The space was previously used by the Western Center for the Conservation of Fine Arts, which moved out at the end of January.

The other two parcels are currently used for parking.

The property sits between a Volunteers of America facility and a building that includes coffeeshop and wine bar The Molecule Effect.

Denver-based Ivins Design is listed as the project architect.

A developer wants to build an eight-story residential building on the 1200 block of Santa Fe Drive. (Thomas Gounley)