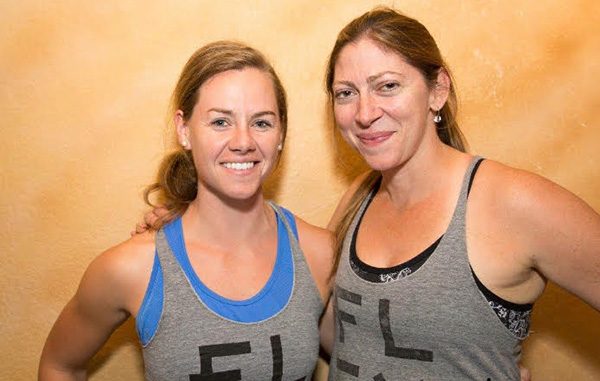 The space is part of Oneida Park, which developers Todd Snyder and Rick Firmine want to turn into a retail and shopping destination similar to Old South Pearl or Old South Gaylord.

“It’s getting a big facelift,” Mellick said. “Park Hill just seemed like a really great fit … we’ve really become comfortable in the products that we have and we have enjoyed carving out our own niche.”

The studio is expected to open this spring.

It will be Flex Yoga’s second location. Mellick and Brown opened the original in Five Points in 2015, after leaving their education jobs the previous year.

From the beginning, Mellick and Brown designed their studio to host both barre and yoga, as they thought the two fitness practices were a perfect blend for each other.

“They complement each other really well because barre taps into toning and strengthening and leaning out muscle,” Brown said. “Yoga is a good complement because it then lengthens them out, stretching them; it’s the yin and yang of the fitness world.”

Flex currently employs 23 independent instructors now, but Mellick and Brown plan to hire as many as 15 new teachers for the new studio. Monthly memberships cost $119, and will be good at both studios.

One thing that the Flex owners said sets them apart from their competitor is male students.
Barre workouts utilize a ballet bar and dancer exercises that target small stabilizer muscles, and thus typically have a broader appeal to women. But the owners have worked hard to change the workout’s feminine reputation.

The owners said one Flex male member apprehensively started trying Barre classes out in March and now averages six to seven classes per week, which has led to significant weight loss. They said another individual, a Division 1 NCAA athlete, takes barre classes during his off-season to work out his fast-twitch muscles.

“We have a large number of men who come in and take barre classes,” Mellick said. “That’s something we worked really hard to break down that barrier. It’s a fantastic workout for everybody.”

Flex has hired F9 Productions to design the new studio space, which previously housed a laundromat. The owners are funding the new studio with a $200,000 loan from Chase Bank the pair secured for their Five Points location.