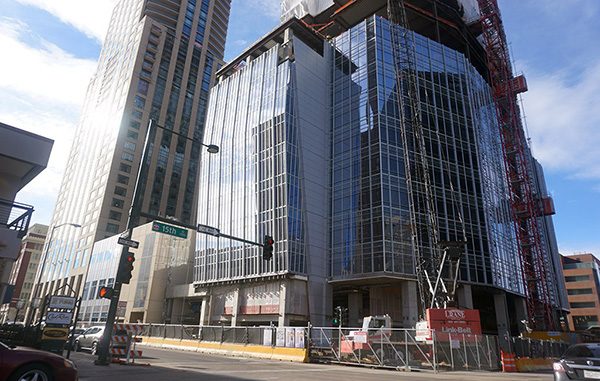 A tenant has signed on to occupy the top floor of 1144 15th St., the tallest office building constructed in Denver in more than 30 years.

Investment management firm Unicom Capital LLC has signed a long-term lease for 20,000 square feet on the tower’s 40th floor, according to a news release from brokerage JLL.

The building at 15th and Arapahoe streets is slated to be complete in February. Denver-based Unicom, which also has offices in New York City, Pittsburgh and Houston, plans to move in during the fourth quarter 2018.

The firm will relocate from the Republic Plaza building at 370 17th St., about a mile away. That building, the city’s tallest, has 56 floors; Unicom leases the 36th.

Houston-based Hines is the developer of 1144 Fifteenth. JLL brokers Ramie Roupp, Michael Crane and Andy Ross represented the company in the transaction.

“Unicom’s offices will have unobstructed views of the city and the Front Range from the entire space, as well as two private terraces on the 40th floor,” Roupp said in a statement. “In addition to the sweeping views and adjacent private terrace, Unicom’s Denver trading floor will have 24-foot unobstructed ceiling heights.”

The 672,000-square-foot office building was designed by architect Pickard Chilton, and is being built by Hensel Phelps. It is the fifth-tallest building in Denver.

Unicom CEO Richard Diecidue said in a statement that the building “impressed us with its innovative, forward-looking design.”

WeWork signed a letter of intent for the building, but the deal recently fell through.

An investment management firm has leased the top floor of 1144 15th St., the tallest office building constructed in Denver in more than 30 years.