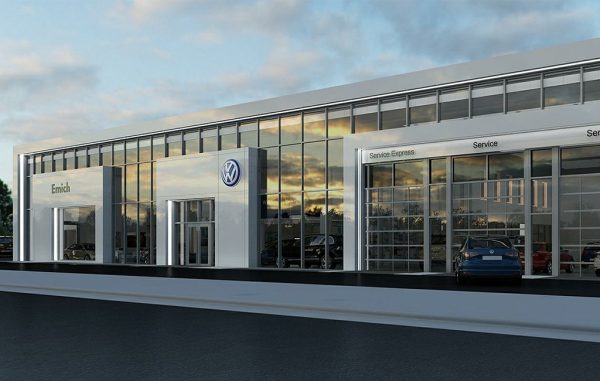 A rendering of the Emich Volkswagen facility planned for the corner of Alameda Avenue and Santa Fe Drive. (D4 Urban)

The new home for a Colorado Boulevard Volkswagen dealership came with a sticker price of $7 million, according to Denver property records.

Emich, which operates at 1260 Colorado Blvd., plans to relocate to the neighborhood just west of Wash Park in 2018.

The seller was Denver-based D4 Urban, which purchased the site for $5.14 million from the Regional Transportation District a day before the sale to Emich, according to property records.

The property was once home to a RTD bus storage and maintenance facility. D4 Development Manager Dan Cohen said the structure, which looked like a barn, was torn down 20 years ago, leaving concrete slabs. The property has been vacant since.

Last decade, Cohen said, a firm had the property under contract with a plan to build multi-family housing. The contract, however, expired when the recession hit.

Cohen said D4 was given the option to purchase the site following a RTD request for proposal several years ago. He said the land is close to other D4 projects — the company is master developer of the former Denver Design District — and said the site has some virtues. 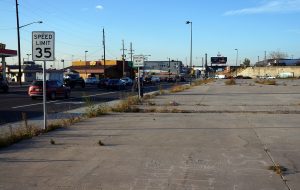 Emich plans to build a two-story, 45,000-square-foot building to house its showroom, offices and repair facility. The company took out a $15.7 million loan in connection with the purchase.

The structure will be the first in the Denver market to feature Volkswagen’s new “White Frame” architecture, according to D4.

D4 will manage the development of the site. W.E. O’Neil is the general contractor.

Emich isn’t purchasing all the land RTD once used. Cohen said D4 is under contract to sell an additional 1.8 acres to another entity.

That deal, he said, hopefully will close by yearend.

A rendering of the Emich Volkswagen facility planned for the corner of Alameda Avenue and Santa Fe Drive. (D4 Urban)

Oh, no! What a terrible, car-centric use for a Light Rail location. Couldn’t this have been a more-thoughtful development than a car dealership? What a totally wasted opportunity to do something cool. I’m sure that this was a quick, easy buck. Good development must take more time, thought and energy. Doesn’t Denver deserve this?