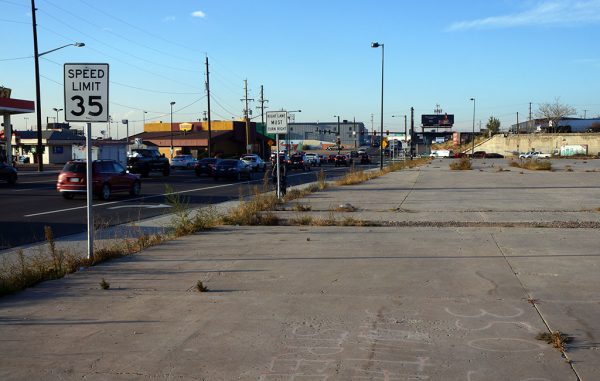 Emich Volkswagen will relocate to 4 acres at the corner of Alameda Avenue and Santa Fe Drive. (Thomas Gounley)

A Denver Volkswagen dealer is moving off Colorado Boulevard to a site near the intersection of Alameda Avenue and South Broadway.

Bell, along with colleagues Dan Bess and T.J. Johnson, represented Emich in the deal.

Bell did not disclose the sale price, and the transaction had not been recorded by the city by press time.

Emich Volkswagen leadership did not respond to a request for comment. Bell said the dealership plans to build a two-story, 45,000-square-foot building to house its showroom, offices and repair facility. It hopes to make the move from 1260 S. Colorado Blvd. during the summer.

Bell said Emich doesn’t own its current site, and general manager Fred Emich “wanted to control his own real estate.”

The seller was D4 Urban. CEO Chris Waggett did not respond to a request for comment.

Bell said that Emich, which has been in the Denver market since 1975, has retained D4’s Waggett and Dan Cohen to manage the delivery of the new facility, under a design build contract with W.E. O’Neil.

The site was once home to a Regional Transportation District bus storage and maintenance facility, which has since been torn down.

Emich Volkswagen will relocate to 4 acres at the corner of Alameda Avenue and Santa Fe Drive. (Thomas Gounley)

Interesting.
They clearly believe they can be successful without having a million cars sitting on the lot.

I think that it will look much better than the vacant lot, however the light pollusion from a dealership is a serious consideration.

James,
I don’t think there will be any more light pollution than I-25, the Denny’s and gas station across the street, the 8 different 4 story apartment buildings within a block, or the main thoroughfares of Santa Fe, Kalamath, and Alameda already do.